Gallstones are the most common reason for removing a patient's gallbladder. Occasionally, simple gallstone disease becomes complicated when gallstones escape the gallbladder and move into a patient's bile duct which connects the liver to the small bowel. When this happens, access to the bile duct is usually done using Endoscopic Retrograde Cholangio Pancreatography (ERCP). A flexible scope is used to visualize the bile duct to determine if there are any stones present, and remove them. In this particular patient, ERCP was not possible, so old-fashioned major surgery would have been necessary.

Surgeons usually want to avoid the bile duct during gallbladder surgery but, in this patient's case, the bile duct was intentionally opened to remove several stones and then repaired. This would normally be significant surgery requiring a hospital stay of a week or more. With this operation, the patient, an 84 year-old woman, went home less than 24 hours after surgery.

Says Dr. Schlachta, "The da Vinci robot made it possible to do what was formerly a major operation as a minimally invasive procedure with an excellent outcome for the patient. This is now day surgery."

The procedure was the first robotic assisted bile duct surgery performed in Canada. Only a handful have been done worldwide.

"LHSC has a strong tradition of medical breakthroughs," says Cliff Nordal, President and Chief Executive Officer, LHSC. "This is another milestone for CSTAR and an example of how we are improving patient care and reducing recovery time."

About CSTAR:
CSTAR (Canadian Surgical Technologies & Advanced Robotics) is Canada's national centre for developing and testing the next generation of minimally invasive surgical and interventional technologies and techniques, including robotics. CSTAR trains the surgeons of the future and shares expertise around the world. Building on world and national firsts pioneered by surgeons in London, CSTAR was launched in December 2001. CSTAR is a collaborative research program of London Health Sciences Centre (LHSC), Lawson Health Research Institute (Lawson), The University of Western Ontario (Western) and St. Joseph's Health Care, London (St. Joseph's).

CSTAR is one of the first interdisciplinary research and training facilities in the world to bring together practitioners, students, and researchers in surgery, engineering, imaging, robotics, information technology and business. Project teams have attracted $20.4 million through peer-reviewed grants and the private sector to fund discoveries in many areas of medicine, from robotic fetal procedures to cancer therapy. 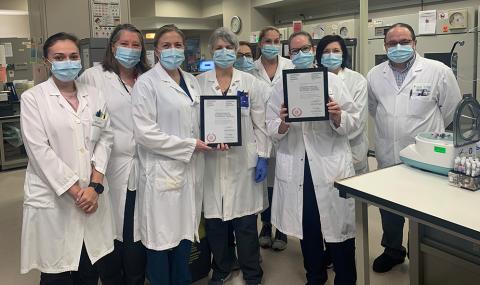 Join the conversation! Tell us what LHSC means to you.
Identical twins retiring after over half-century of making a difference for others
LHSC recognizes Antimicrobial Awareness Week this November

Giving Tuesday is November 30: You can be the reason patients receive extra financial support to cover their medical expenses

Equals Brewing Campaign: Support the Baker Centre through Equals Brewing
Heroes of Health: Use your passion and choose your cause with DIY Fundraising
Miracle Treat Day is Thursday October 28!