(LONDON, Ontario) - Sharing the remote takes on new meaning with the latest in robotic technology demonstrated by London doctors today at the Ontario Hospital Association (OHA) Convention in Toronto. In a live demonstration, doctors from London Health Sciences Centre (LHSC), a world leader in robotic surgery, and the new national surgical robotics centre in London, Canadian Surgical Technologies and Advanced Robotics (CSTAR), showed how the new frontier of robotic surgery is going to change the face of health care.

Dr. Rayman was in Toronto and guided Dr. Malthaner through a lung biopsy 200 kilometres away in an operating room at the University Campus of LHSC. Both doctors were able to see and hear one another through videoconferencing technology. Using the robot called SOCRATES, Dr. Rayman had remote manipulation of the AESOP robotic endoscopic camera inside the patient in London. The technology of telestration allowed Dr. Rayman to draw on an electronic tablet to point out anatomical landmarks on the view from the endoscopic camera to Dr. Malthaner. The telestration drawings appear simultaneously on the video output that Dr. Malthaner sees in the operating room.

Dr. Rayman says, "Robotics is allowing us to create the next step in minimally-invasive surgery. The SOCRATES and AESOP robotic technology has opened the door to the future where surgical expertise can be offered virtually anywhere without actually having to travel."

In February of this year, Dr. Malthaner was one of the surgeons involved in the world's first surgery to use telementoring using the remote control technology of the SOCRATES robot. Dr. Malthaner says, "Telementoring and telesurgery provides a live, second opinion in the operating room. For patients, it means the expert comes to the patient, instead of the patient to the expert."

LHSC President and CEO, Tony Dagnone, says, "Our vision for the future is that surgical robotics will allow a major teaching centre like LHSC to mentor surgeons in community hospitals. The patients will also benefit by receiving care right where they live."

CSTAR is a joint effort between LHSC and the Lawson Health Research Institute (LHRI) in London. Construction of the new national surgical robotics centre is expected to begin later this fall at LHSC's University Campus. CSTAR will bring together engineers, scientists, information technologists and clinicians working on multidisciplinary project teams to advance surgical robotics. CSTAR will serve as a global nexus for the growth and commercialization of this vital new field of health care that will become the established standard within five to seven years. The new technologies developed at CSTAR will mean shorter hospital stays and improved outcomes for patients, as well as decreased annual health care costs by millions of dollars. 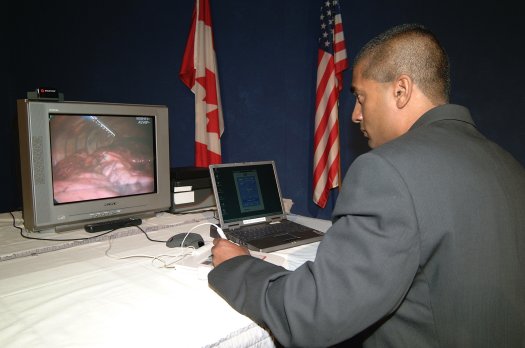