An individual may inherit a mitochondrial disease in one of many ways. How a disease is inherited, depends upon where the mutation exists. Wherever there is DNA, there is a potential source for a mutation. In a human cell there exist not one, but two full genomes. The first is the human genome located in the nucleus of the cell, where DNA is organized into structures called chromosomes. The second is mitochondrial DNA (mtDNA) which is located in the organelle after which it is named.

What is the source of the problem?
Our DNA inside the nucleus is our entire body’s blueprint which we inherit from both of our parents. It is organized into two sets of 23 chromosomes (one set from each parent). Along the chromosomes are genes. An average human genome contains approximately 26 000 genes. A small fraction of those nuclear genes code for mitochondrial proteins, therefore a mutation in one of these genes could lead to mitochondrial disease.

If there is a mutation in a nuclear gene in my parents, what are the chances of me inheriting the mutation or the disease?
Recall that we have two copies of each chromosome—one from each parent. Both chromosomes contain the same genes and code for the same proteins, just slightly different versions of it. An example is eye colour; both parents have genes coding for eye colour yet the father may have the version for blue eyes and the mother may have the version coding for brown eyes. These different gene versions are called alleles. Variation exists within everyone’s genes—that is how we are all different. However, some genetic changes (or mutations) can cause the gene to not function properly and thereby cause disease. Genetic changes leading to disease are inherited in my different ways. The chance of being affected with a disease depends on many factors which are outlined below.

Autosomal Dominant
Like its namesake, autosomal dominant inheritance occurs because one allele “dominates” over the other. Of the two alleles, one genetic change on one allele will result in the condition being expressed, even if the other allele does not have a genetic change. This also means that at least one parent may also have the disease. The images below show possible scenarios:

As seen above, it is only possible to inherit a recessive disease when a mutation exists on both sides of the family.

Where is the genetic change?
As previously discussed, there are two sources of DNA in our body existing in two genomes—the nuclear DNA and mitochondrial DNA. Mitochondria are of course the energy producing organelles in the body.

The inheritance of mtDNA is very different from the inheritance of nuclear DNA. It follows a pattern known as maternal inheritance. The process of conception and the relative contribution of materials from the sperm and the egg can help explain the concept. Sperm cells do not have mitochondria therefore MtDNA is not present in these cells, meaning the father will only contribute nuclear DNA and will not contribute any mtDNA. On the other hand, many mitochondria are present in a woman’s egg; therefore mtDNA from the mother is passed down to the next generation (in addition to nuclear DNA). Consequently if a mother has changes (mutations) in her mtDNA, these can be inherited by offspring. Essentially, mitochondrial diseases caused by mutations in the mtDNA can only be inherited from the mother, not the father.

The images of the pedigrees below illustrate this concept:

If there is a mutation in my parents’ mitochondrial DNA, what are the chances that I will inherit the mutation or be affected by the disease?
The answer to this question depends on which parent has a change in their mtDNA. If the mutation/disease is in the father, it will not be passed down.
If it occurs in the mother, the mutation will almost always be passed down but the effects of the disease can be variable in the next generation. This occurs due to a phenomenon known as heteroplasmy.

As indicated above, mitochondria are present in a woman’s egg cell, as well as other cells in the body. At the conception of a child, the woman’s egg and the man’s sperm combine to form one complete genetic complement. Recall that all the mitochondria in this newly formed embryo are inherited from the mother.

All cells go through a process of cell division, including a developing embryo, which divides a cell into two distinct cells. During cell division, mitochondria are randomly dispersed throughout the cell. When a cell divides, the mitochondria present are divided randomly based on their positioning within the cell during division. If there is a mtDNA mutation present in any of the mitochondria, these can be divided into the newly formed cell. Based on the random nature of the dispersion of the mitochondria within the cell, there is sometimes an uneven distribution of mitochondria in these divided cells—some with mtDNA mutations and other without such mutations. If the patient has a disproportionate amount of mtDNA with mutations, the patient may surpass the threshold effect and express the disease.

Whether the next generation will be affected by the disease depends upon how mitochondria have divided themselves into the female’s ova. This is illustrated below in the image
ANIMATION 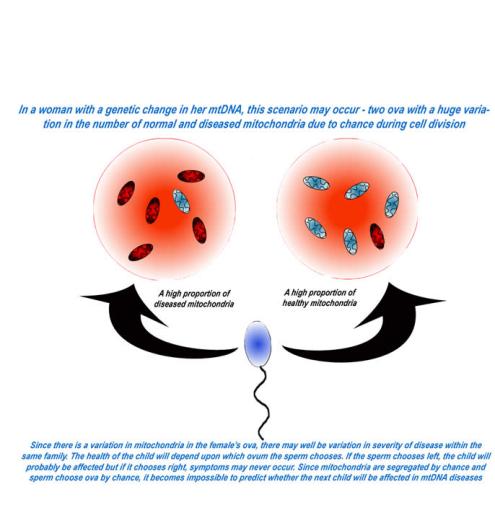 Each cell contains many mitochondria; likewise, each mitochondrion contains many copies of DNA. This leads to the concept of threshold effect. A certain number of mutation in the mtDNA must be present in any cell in order for symptoms to occur, at which time the “threshold” is overcome).

X-linked Inheritance involves the sex chromosomes, X and Y, which are present in the nuclear genome. Recall that a female has two X chromosomes, while males have one X and one Y. When there is a genetic change in one of the genes of the X chromosome the inheritance is said to be X-linked.
Males are more likely to express an X-linked condition because they have one X and one Y chromosome. When males inherit a genetic change on their X chromosome, they do not have a second copy of the gene; whereas females have two X chromosomes and therefore two copies of each gene. Therefore, if a female were to inherit a genetic change along her X chromosome, she would be a carrier for that associated condition. Females with a mutation present on both copies of a gene present on her X chromosomes would be affected with the associated disease.
Interestingly, there is a phenomenon known as “X-inactivation” or “Lyonization” that renders one copy of each of a female’s X-chromosomes inactive. This occurs early in the process of the development of the fetus. If the female’s X-inactivation is “skewed,” to include more inactive copies of the “normal” gene, then this female may exhibit some symptoms of the condition, while genetically she would be said to be a carrier. This phenomenon explains why some women who are carriers of an X-linked condition display symptoms of the disease, albeit typically less severe than their male counterparts.
This is illustrated below. 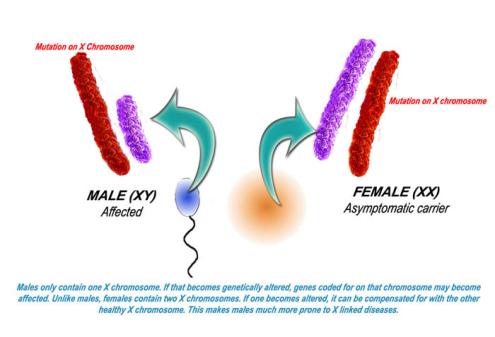 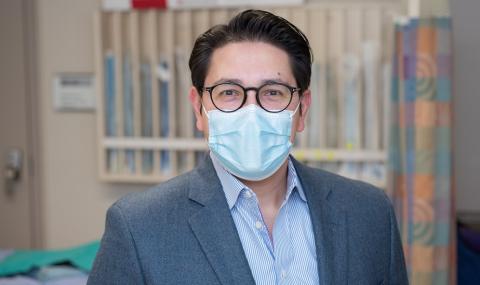 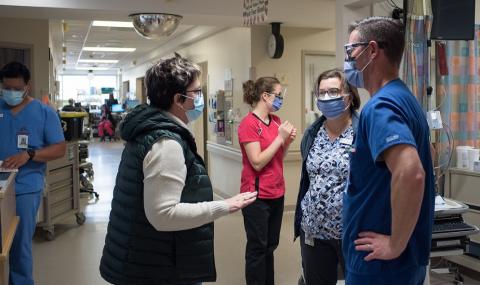