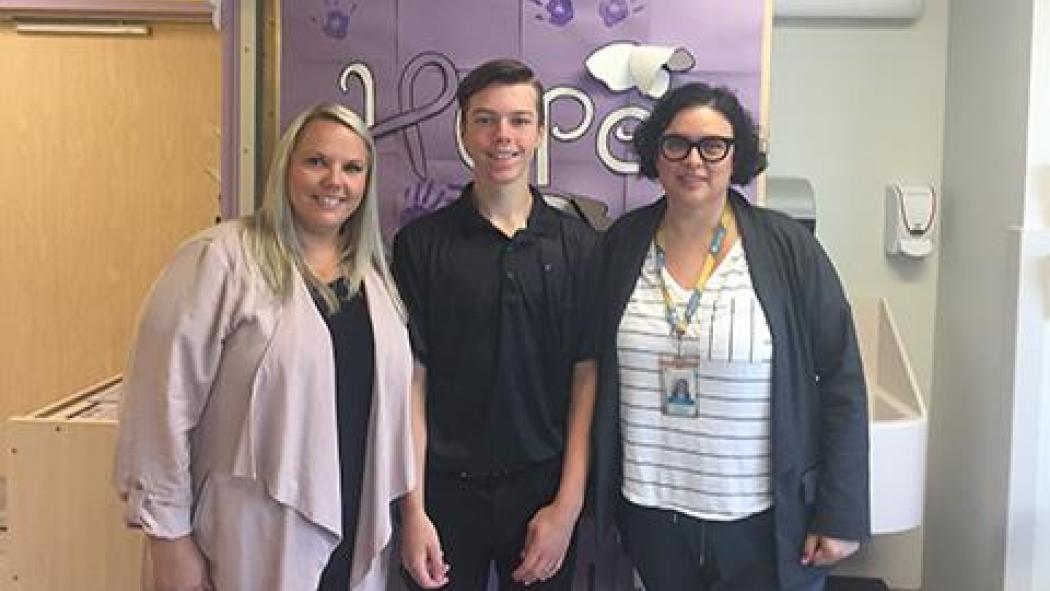 A London youth was the first paediatric patient in Ontario to receive a robot-assisted stereoelectroencephalography (SEEG) procedure that was performed by the Paediatric Epilepsy Program at Children’s Hospital at London Health Sciences Centre (LHSC). LHSC was previously the first in Ontario to robotically perform the SEEG procedure on adult patients, successfully transferring the knowledge and skill set to the specialized team of paediatric neurosurgeons.

Fourteen-year-old Ethan was the first paediatric patient to undergo this robot-assisted procedure in Ontario. His seizures first began at age nine, taking place at night while he slept. Despite efforts to implement non-surgical treatment options, such as multiple anticonvulsant medications, the seizure activity continued to slowly escalate over time and it reached a point where he experienced three straight days of short 15-20 second seizures that were taking place every couple of minutes. It was at this time that Dr. Andrea Andrade, paediatric neurologist and Medical Director of the Paediatric Epilepsy Program at Children’s Hospital at LHSC, made the recommendation that Ethan would be a good candidate for a SEEG procedure.

“We were confident that our partnership with the adult team and our own extensive expertise in performing the traditional technique would allow us to successfully undertake the robotic approach in a paediatric patient and Ethan was a perfect candidate,” says Dr. Andrade. “What would normally be an 8-10 hour surgery can be done in about two hours; and not only are the risks associated with the use of general anesthetic minimized, the diagnostic outcomes are also improved as a result of extremely precise electrode placement.”

Coordinating this paediatric-first procedure involved extra steps as the robotic surgery equipment resided in the adult program at University Hospital (UH), while the specialized paediatric care was located across the city in the Children’s program at Victoria Hospital. The adult and paediatric epilepsy teams worked together to ensure there would be smooth transfers between sites, and on October 4, 2018 Ethan underwent the SEEG procedure at UH. The inpatient monitoring that immediately followed back at Children’s Hospital provided the crucial insight needed to pinpoint the location of the brain where seizures were originating, allowing the paediatric epilepsy team to determine that Ethan was in fact a candidate for brain surgery that would reduce or potentially eliminate seizure activity.

Ethan’s surgery was quickly scheduled to take place so that it could occur at the same time the electrodes from the SEEG procedure would be removed. On October 22, 2018, Ethan had his final surgery at Children’s Hospital.

“Throughout the entire process we knew we were in good hands as we feel there is really no better team in epilepsy than what we have here in London,” says mom, Anita. “We are so grateful to the many teams of individuals at both UH and Children’s who provided care for Ethan and ensured that his voice was always heard at every step. The quality of our lives has truly been changed for the better with this surgical first.”

Ethan has remained seizure free since his October surgery.

The purchase of the Renishaw neuromate® stereotactic robot was made possible through a generous donation to London Health Sciences Foundation.