Dr. Jeffrey Nisker, Physician, Obstetrics and Gynaecology, London Health Sciences Centre (LHSC), has been awarded the Canadian Fertility and Andrology Society (CFAS) Award of Excellence.  Dr. Nisker was recognized for his outstanding contribution to, and leadership in the field of reproductive medicine and science, particularly regarding ethical and social consequences of reproductive and genetic technologies.

The award was presented in front of colleagues at the Advancing Wellness in Reproductive Health Continuing Medical Education (CME) event organized by The Fertility Clinic and faculty from the Department of Obseterics and Gynecology, Schulich School of Medicine. “He represents many roles in the context of reproductive health in Canada including doctor, scientist, administrator, editor, writer, and ethicist. His work is driven by a passion for just and moral care, and equality for all,” said Dr. Margaretha Rebel, Specialist, The Fertility Clinic, LHSC.

A LHSC physician, Dr. Nisker is also a Professor of Obstetrics-Gynaecology at the Schulich School Medicine & Dentistry, Western University, and a Scientist at Children’s Health Research Institute. He holds, and has held, CIHR and Genome Canada grants to explore ethical and social issues in reproductive medicine, genetics, and exposure of pregnant women to environmental toxins. He has also held a CIHR/Health Canada grant exploring public engagement for citizen deliberation regarding preimplantation genetic diagnosis.

He has also written or co-written over 170 scientific articles and book chapters, as well as seven plays. His plays have been performed throughout Canada, the United States of America, the United Kingdom, Australia and South Africa.

CFAS recognized Dr. Nisker in November 2015, but he was unable to attend the ceremony due to illness. Fittingly, Dr. Al Yuzpe, Co-founder and Co-director, Olive Fertility Centre, accepted the award on Dr. Nisker’s behalf at the CFAS ceremony and also delivered remarks at the CME event, “There is a famous saying, ‘you are confined only by the wall you built for yourself,’ and Jeff never built any walls for himself,” he said. “Jeff has earned his Award of Excellence and is in the company of illustrious and worthy recipients.”

Dr. Nisker accepted by Award by sharing a quote from The Little Prince by Antoine de Saint Exupéry, “One sees clearly only with the heart. Anything essential is invisible to the eyes." 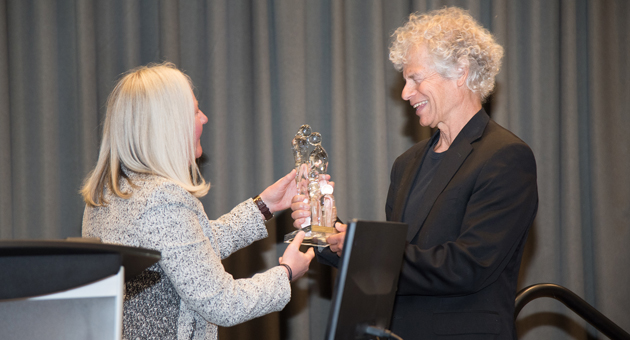