In the fall of 2015, Christine O’Leary was getting ready to head to an NFL game. She woke up feeling fine, but when she stood up to get ready, she felt dizzy, quickly sat back down and then fell forward. After calling out to her husband for help, she initially thought it was just her sciatica acting up, but once he began to help her up, it was clear that something more serious was happening.

“He kept asking me why I wasn’t using my left arm to help prop myself up and why I was talking like that,” recalls Christine. “The next thing I remember was being surrounded by first responders.”

Her husband had recognized the signs of stroke – inability to raise both arms, slurred speech and face drooping – and knew he needed to call 911 right away.

Christine was taken by ambulance from her home in Wardsville directly to LHSC’s University Hospital. It was there that it was confirmed that she had in fact had a stroke.

“Both my daughter and I were in shock,” says Christine. “I was a young, healthy and active person; I never thought in a million years that I would have a stroke. I’ve learned that it can and does happen, so  recognizing the signs of stroke, no matter the age of the person, is the key to having a good outcome as every second counts in terms of saving the brain.”

At LHSC, neurologists quickly determined that Christine wasn’t a good candidate for tPA, a clot-busting drug, due to the size and placement of the blockage, but was a candidate for a procedure called endovascular treatment (EVT), which was completed by radiologist, Dr. Sachin Pandey.

EVT is an image guided mechanical retrieval of clots where neurologists, neurosurgeons and neuroradiologists use a catheter inserted in the groin to reach the brain, remove the blockage and re-establish blood flow. Unlike tPA, EVT doesn’t always have the same firm time constraints, as it is based on how much brain is still alive and the volume of blood flow around blockage.

“EVT is a remarkable treatment option for stroke patients who won’t see a lot of benefit from tPA because of the size or placement of the clot,” says Dr. Mel Boulton, neurosurgeon at LHSC. “It’s not only a procedure that saves lives, it has also been demonstrated to lead to better patient outcomes; so that someone who would be destined to have deficits without EVT can be returned to normal or near normal quality of life.”

This is a sentiment that is echoed by Christine.

She notes, “I have a bit of lasting spasticity in my leg and arm, but I still hike, have hiking goals, and recently joined back at the gym to work on mobility. I consider myself to have always been a very active and positive person and I’m so appreciative to have the opportunity to still be that person. I’m thankful every day that my husband recognized the signs of stroke, and I’m grateful to Dr. Boulton for his expert care, his patience in answering so many questions and his willingness to take the time after the fact to explain exactly what happened.”

Recognizing the signs of stroke

Christine shares her story in the hopes that it will help others to learn more about strokes and what to look for. To spot the signs of stroke, simply think and act FAST! 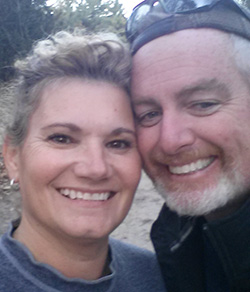 Christine O’Leary and her husband
celebrate her first post-stroke hike,
which happened exactly one year
to the day that her stroke occurred