When we think of “field research,” we picture scientists gathering samples and specimens from their natural environment. For Lawson’s Vivian McAlister, the field is a battlefield.

In 2007, McAlister joined the Canadian Armed Forces. “I joined to assist in the endeavor overseas as a surgeon,” he says. “I believe that if soldiers are in harm’s way they have to have surgeons available to help in the medical care.” Since then, he has deployed to Afghanistan four times, and once to Haiti.

This combination of medicine and military has equipped McAlister with a unique research perspective. His efforts have been recognized through a number of service awards and commendations, including one from the Surgeon General. At NATO’s recent symposium in Halifax, McAlister shared his insights on the role of surgery after blast injury.

Blast injury is the most common cause of injury and death in modern combat, occurring most often via improvised explosive devices (IED). As armored military vehicles and aerial surveillance have become more advanced, IEDs have increasingly targeted individual soldiers. In 2010, the rate of foot-patrol attacks in Afghanistan increased by over 300%. The goal is always the same: inflicting the maximum amount of pain and suffering without causing death.

McAlister’s research shows IEDs can cause a variety of devastating injuries. Most devices are packed with stones and soil, designed to travel up between the victim’s legs to shatter the groin area. As they explode, IEDs also release pressures that can impact the ear drums, the organs, and even the spine. The general force from the explosion can inflict injuries similar to whiplash, and the intense heat, light, toxic gas, and other contaminants it releases can also cause serious complications. Even debris swept up in the explosion can do as much damage as a gunshot wound. Depending on the severity of the injuries, soldiers can face up to four amputations, and even death.

Needless to say, this is an extreme environment. Soldiers and surgeons alike are constantly thrust into dangerous and unpredictable scenarios. But while the circumstances are incredibly dangerous, McAlister believes they are the key to developing life-saving innovations. “Research translation is accelerated in the military; there’s a very productive interaction between civilian surgery and the surgery required for combat casualty care,” he explains. “I have had to improvise doing surgery in civilian circumstances, just as I have in combat situations. That requirement to improvise often brings about development.”

For example, by reviewing the nature of soldiers’ injuries, training has been modified to improve survival. “The best example is pre-hospital care, where we have developed programs so that soldiers can give care to themselves, and to their buddies,” McAlister explains. “Medical technicians, who are equivalent to paramedics in the civilian world, have also been trained to care for casualties at the point of injury, often under fire.”

When soldiers arrive at hospital facilities, the attending nurses and physicians have been trained to receive and triage large volumes of patients at a time. This allows them to administer care quickly and effectively, no matter how extraordinary the injury or how limited the resources. Civilian hospital equipment like X-ray, ultrasound and CT scanners have been modified and made portable to cater specifically to combat injuries.

Even surgical care procedures have been impacted by research findings. For example, the pelvic injuries common to IEDs are incredibly difficult to treat. “There’s a high proportion of soft tissue injury resulting in excessive blood loss and a need for massive transfusion,” McAlister explains. “While tourniquets have helped control haemorrhage from the limbs, they can’t be applied to the pelvis – the bones are in the way.” To address these issues, surgeons have developed a combination of packing and binding to slow heavy blood loss.

The survival rate for soldiers suffering from blast injury is roughly 82%, but McAlister is hopeful he can raise the bar. His on-going research goals include ways to continue to improve treatment of pelvic-genital region injuries in the field and in surgery, to improve the design of personal protective equipment design, and to develop limb replacement technology.

This year, McAlister will make his fifth trip to Afghanistan, this time to mentor local surgeons. No matter which role he fills, he hopes the impact will be the same. “We’re very lucky in London to have a confluence of clinicians, of military personnel, of a defense industry, and of biomedical and physics researchers,” he says. “We have an opportunity to make a big contribution to the development of systems that will protect people who are subject to these types of explosions.”

Researchers interested in working with the Canadian Armed Forces are encouraged to contact Defense Research and Development Canada (http://www.drdc-rddc.gc.ca/). 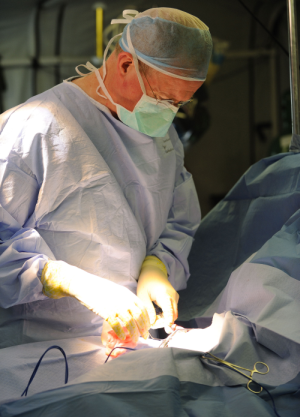 Dr.Vivian McAlister performs a surgery on a hernia of a young Haitian.