Patients with ODS have experienced a physiological change that creates an empty space beside the rectum which can shift and physically block the emptying of the bowel. If straight-forward treatments like exercise, dietary changes and laxatives fail to remedy the situation, patients are then referred for surgery which can require up to a week in hospital to recover.

However, using LHSC’s da Vinci robot, colorectal surgeon Dr. Nawar Alkhamesi and his team were able to robotically insert a mesh into the empty space so that there is no longer room for the rectum to prolapse (slip forward or down). Using this much less invasive robotic approach, patients can expect just one overnight stay in hospital.

“Patients see immediate results following this surgery,” says Dr. Alkhamesi. “The mesh will eventually be absorbed by natural fibrous tissue which then holds the rectum permanently in its normal position.”

Elaine Fisher, 45, received this robotic surgery on Oct. 30, 2015. With a family history of Crohn’s and celiac disease, her doctors originally were focused on those illnesses as causes for her symptoms which she had experienced for nine years. Eventually referred to LHSC’s Dr. Alkhamesi, Fisher was diagnosed with a rectocele – a prolapse of the rectum – that she thinks was caused by childbirth and which continued to weaken over the years. Fisher was unable to bend, cough, sneeze or laugh without fear of the rectocele emptying against her will.

Fisher and her family own and operate a beef and dairy farm in Ayton, Ont. With four children, Fisher was an active participant in her community holding a variety of volunteer roles in addition to her work on the farm. As her symptoms progressed without a diagnosis, Fisher says she became confined to her home as she needed to be near a bathroom at all times.

“Because of the pain, cramping and discomfort, there were days when I just couldn’t even get out of bed,” recalls Fisher. “There was definitely an element of depression that came with that – with not being able to do any of the activities I wanted to do.”

Fisher says the opportunity to receive the robotic surgery was a little daunting but she was excited by how less invasive it was compared to the alternative. “With a faster healing time, less overall pain and time off from work, it was an easy decision. The five incisions I have are now barely noticeable and I had little to no complications afterwards.”

Fisher has been able to fully resume the everyday activities – including work on the farm – that she enjoyed before ODS symptoms overwhelmed her. Now she wants to help create awareness about this illness which many people may feel too embarrassed to seek help for.

“If you suffer from symptoms of ODS please talk to your physician and request the tests needed to identify what is causing you the discomfort. It is a very sensitive topic but there is a very successful, non-invasive surgery that can relieve you of the embarrassing symptoms. I can't thank Dr. Alkhamsei and his team enough for getting my life back,” says Fisher.

Dr. Alkhamesi echoes Fisher’s call for awareness, as symptoms in roughly 30 per cent of cases referred to him end up being caused by a cancerous growth that are best treated with early detection. 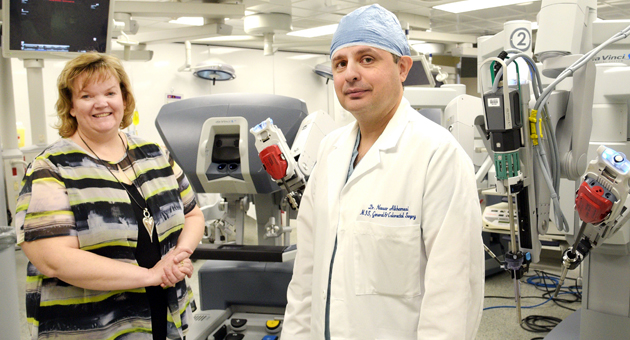 Elaine Fisher gets a close-up look at the da Vinci surgical system which was used in a robotic ventral rectopexy surgery for the first time in Canada at London Health Sciences Centre. Elaine’s surgery was performed by LHSC colorectal surgeon Dr. Nawar Alkhamesi.