London Health Sciences Centre’s (LHSC) Epilepsy Program is the first in Ontario to perform a robotic-assisted stereoelectroencephalography (SEEG) procedure, in which electrodes are placed into the brain to map epileptic seizure activity. The goal of the surgical procedure is to determine what part of brain the epileptic seizure activity is coming from. Once the seizure onset is localized, neurosurgeons can determine whether a good seizure outcome may be possible through brain surgery.

The use of robotic-assistance allows LHSC’s neurosurgery team to be much more precise with the placement of the electrodes in half the amount of time than the previous standard frame technique. Its use has also made it possible for the team to place electrodes in areas they couldn’t reach before, using trajectories previously not possible.

Sara Owanis, age 23, from London, Ontario, was among the first group of patients to undergo a SEEG procedure using this new robot-assisted technique. After a single seizure episode followed by a year of experiencing short 30 second periods almost daily where her mouth would twitch, sounds would become intense and her speech impaired, she came to LHSC for monitoring in the epilepsy unit. It was here that it was determined she was having deep brain seizure activity and a SEEG procedure was recommended.

“With deep brain seizure activity like Sara’s, we need a SEEG procedure to tell us more because it allows us to reach areas of the brain that are off limits with less invasive forms of monitoring,” says Dr. David Steven, neurosurgeon and co-director, epilepsy program, LHSC. “Use of the robot speeds the total procedure time and allows us to plan trajectories previously impossible, both of which make surgery safer and more accurate. In turn, better electrode placement provides us with higher quality information during monitoring, which leads to better determination of whether brain surgery to reduce or eliminate seizure activity is possible.”

For Owanis, use of the medical robot also brought the benefit of no longer needing to be awake for the positioning of the stereotactic frame on her head before undergoing general anesthetic for the surgery. “I know it probably wouldn’t have hurt, but it took a lot of mental stress away going into the surgery knowing that I wouldn’t have to be awake for any of it.”

Since the first robot-assisted surgery in April, the neurosurgery team has continued to look for ways to advance innovation with this procedure, including use of the Renishaw neuromate® stereotactic robot in conjunction with the Siemens Artis Zeego interventional imaging system. “We’re now using two medical robots to assist in a single neurosurgery procedure,” adds Dr. Steven. “For patients, this eliminates the need to have imaging done outside of the operating room and creates a more seamless surgical experience. As the country’s largest epilepsy program, we pride ourselves on looking for opportunities to improve the patient experience as we build on our rich history of firsts.”

The purchase of the Renishaw neuromate® stereotactic robot was made possible through a generous donation to London Health Sciences Foundation. 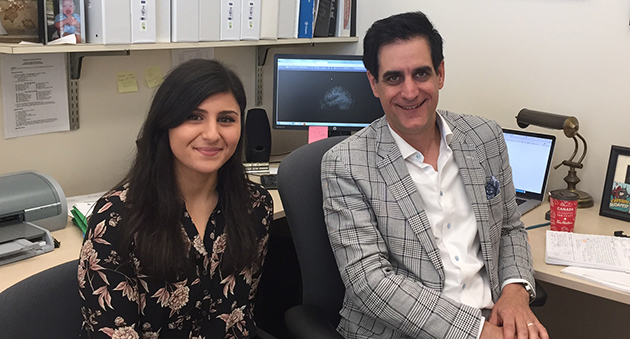