On April 25, Kelly Dickson, from Cambridge, Ontario became the first patient in North America to receive the BONEBRIDGE™ – a bone conduction hearing implant.  The surgery was successfully performed at London Health Sciences Centre (LHSC) by Dr. Sumit Agrawal and his surgical team.  Today the hearing device was activated - allowing Dickson to hear a full range of sounds.

“This is an exciting new treatment option for patients with certain hearing impairments,” says Agrawal. “The system includes an implant and externally worn audio processor that together simulate the natural hearing process.”

BONEBRIDGE is new technology developed by MED-El Medical Electronics that makes it possible for people with hearing impairments, including conductive and mixed hearing losses or single-sided deafness, to hear a full range of sounds.

The audio processor records sound and converts it into signals which are transferred through the skin to the implant. The implant converts the signals received into mechanical vibrations that are transmitted to the surrounding bone. The bone then conducts these vibrations to the inner ear where they are converted into nerve signals and transmitted as impulses to the auditory nerve.

“Unlike older technology, the processor communicates wirelessly through intact skin, which makes it very cosmetically appealing and maintenance-free for patients,” adds Agrawal. 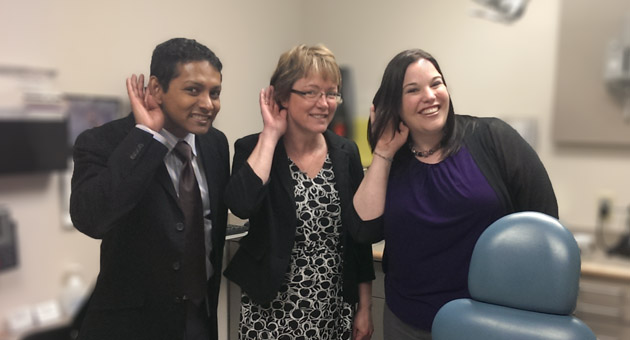 Dickson has suffered hearing loss for four decades and was frustrated with hearing aids. “I would eventually have to stop wearing hearing aids because I would get ear infections. This gives me the opportunity to be free of those,” says Dickson.

“During activation of the device various parameters will be set to best suit Kelly’s individual hearing,” says Kim Zimmerman, audiologist, LHSC. “The device will improve access to sound, bring hearing into the normal range and, for patients like Kelly, greatly reduce the impact of ear infections on hearing.”

At home, Dickson looks forward to better hearing her husband and children, enjoying music more clearly and even listening to nature. As a nurse, Dickson also looks forward to using her stethoscope again and conversing with patients easily.

“This is an option that can help me and others,” says Dickson. “I am absolutely ecstatic this technology is now available in Canada.”

Dickson outside of the hospital, hearing sounds for the first time with the new BONEBRIDGE implant.