November 17 is World Prematurity Day, and for families and staff in the Neonatal Intensive Care Unit (NICU) of London Health Sciences Centre (LHSC), it is an opportunity to stop and reflect on the miraculous work being done in their unit each and every day of the year.

One in ten babies is born preterm – defined as any birth which occurs prior to the completion of 37 weeks gestation.  Babies born prematurely face increased risk of numerous complications including: immature lungs, gastrointestinal problems, infection and even haemorrhaging of the brain.

As a level three tertiary care centre, the 42 bed NICU at LHSC is often at capacity, receiving the tiniest babies from across Southwestern Ontario for care.  Many stay in hospital for 4-6 weeks, some significantly longer.  All stay in hospital until close to their due date (at least 35 weeks gestation).

Two pound Corbin Chambers is one of those babies. His mom, Kailee, was transferred to LHSC from Woodstock General Hospital when she presented there leaking amniotic fluid and dilated despite being only 24 weeks pregnant. After attempts to stop the labour failed, little Corbin was delivered at LHSC on October 8, weighing just one pound, six ounces.

“It was scary. There were so many machines keeping my baby alive,” says Chambers. “I didn’t even know if he was a boy or a girl at first because he was taken out of the room so fast. One of the nurses went into the other room to find out for me.” 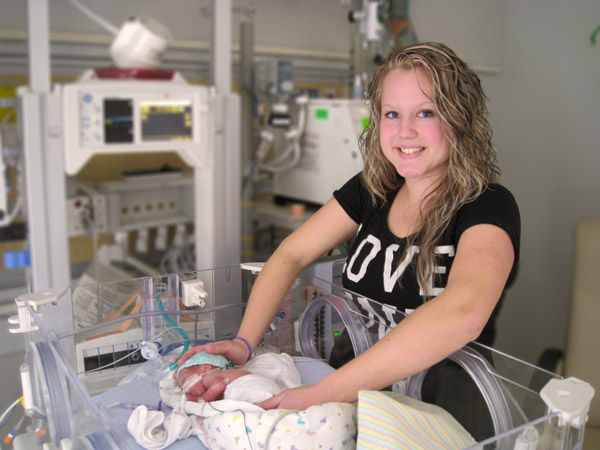 Without the highly specialized NICU, babies like Corbin would have a much lower chance of survival following birth. “The NICU at the Children's Hospital at LHSC cares for sick and at risk babies from all over Southwestern Ontario”, says LHSC Neonatologist and Director of Nurseries, Dr. Henry Roukema.  “We treat acutely ill babies and babies with surgical problems who could not get treatment elsewhere in the region.  In addition, we care for at risk babies, especially the extremely preterm, with a goal to prevent them from getting sick by proactively managing the problems they are at risk for.  This takes a very specialized group of caregivers.”

Chambers, along with husband Brady, are grateful that the LHSC NICU was here for them when they needed it. “I didn’t realize there were so many premature babies until we got into the unit. It’s been nice getting to know the nurses and doctors in the NICU – the nurses have become like second moms to Corbin, and I know that when I go home at night, they’re taking care of him as if he was their own.”

“We are not only committed to providing the best care to the babies in our unit, but to ensuring that families feel comfortable and safe. One of our priorities is to keep families involved and informed, and to help them cope in a very difficult situation” says Dr. Roukema.

Little Corbin will stay in the NICU until at least the end of January, when he was originally due. As for the challenges of being a parent to a preterm baby, Chambers compares her experience to that of a parent to a full term baby. “It’s really different being a preemie mom. You can’t do what the other moms do. I wasn’t able to touch Corbin until he was two weeks old because he was so fragile. He’s one month now and I’ve only been able to hold him once. It’s hard to see other mother’s holding their babies when I can’t. But when I go home, and see his nursery waiting for him, I remind myself that someday I will bring him home.”