The award is presented to a physician who is a strong advocate for organ and tissue donation both internal and external to the hospital, who mentors other hospital staff and physicians on the importance of organ donation and who has illustrated a dedication to advancing donation practices.

As a critical care physician who trained at LHSC – a hospital that cares for neurosciences patients as well as home to the regional trauma program – Dr. Sharpe says it is the nature of the hospital’s business to care for people who have experienced acute brain injuries.

“During my training, I also worked with physicians who were considered champions of transplantation, including [Drs.] Neil McKenzie, Bill Wall and Cal Stiller, so organ donation was part of a culture established early on in my career.”

Dr. Sharpe says years ago when his team approached a family about the possibility of donating their loved one’s organs, not many people knew much about it. “It was a totally new concept,” he says. “Today, in many instances families are actually the first to bring up the subject when their loved one has had a significant injury.”

One mother who understands all too well the importance of organ donation awareness is Ann Hider, 79, whose son Barry McGucken became an organ donor following his sudden death from a brain aneurysm in 1984.

While there was not the same level of awareness about the importance of organ donation back then, Hider says it was fortuitous that just six weeks before her son’s death he told her that he had just signed his organ donor card. “There wasn’t the same level of awareness about organ donation then, so it was like a miracle that he came in and told me that when he did,” says Hider.

Two teenagers ended up with her son’s kidneys and another young girl received his eyes. Hider says it brings her comfort to know that her son was able to help save and improve the lives of others—which is exactly why Dr. Sharpe will continue working with his team to increase organ donation awareness.

“What I’ve learned over the years is the beneficial impact organ donation has on donor families,” says Dr. Sharpe. “In talking to patients’ families who have donated, it’s a tremendous benefit for the grieving families. So my resolve in all of this is to ensure each and every potential organ donor’s family has had the opportunity to make the decision.”

Both Dr. Sharpe and Hider underscore the importance of talking about your end-of-life wishes with your family, and with taking the step to register your consent to be an organ donor at BeADonor.ca/LHSC. 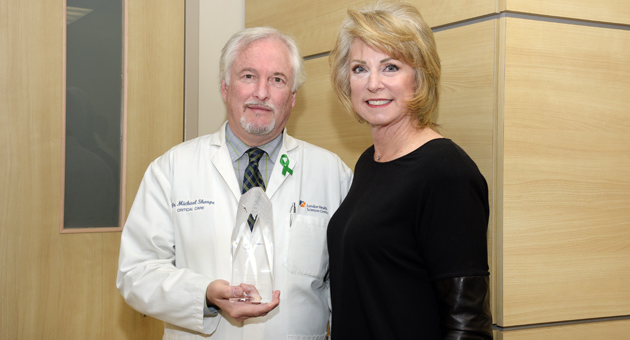