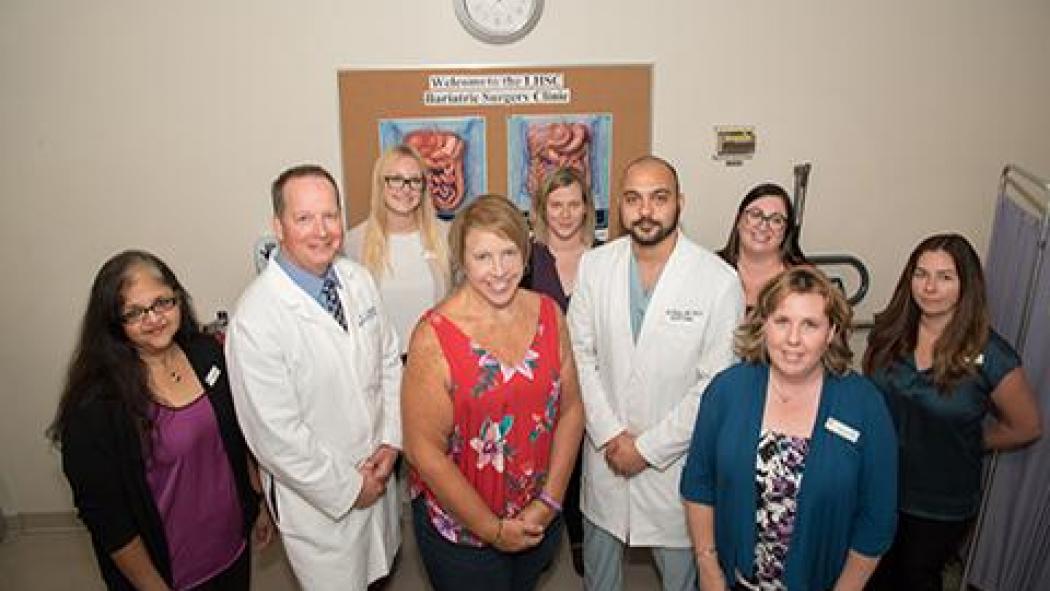 When Lori Masterson’s husband, Kevin, made the decision to have bariatric surgery to help overcome obesity he had to travel for regular appointments to Windsor, and then have surgery in Toronto. Two years later, Lori, 50, was able to receive the same services in London thanks to the establishment of a full-service bariatric surgery program at London Health Sciences Centre (LHSC).

LHSC is now a Bariatric Centre of Excellence (BCoE) and part of the Ontario Bariatric Network. “We offer a rigorous, full-service bariatric surgery program that starts with assessment, and provides comprehensive care before, during and after surgery,” says Dr. Christopher Schlachta, surgeon and regional lead for Bariatric surgery at LHSC. “Patients receive thorough assessments and education prior to bariatric surgery, and are closely followed post-operatively for a period of up to five years.”

The program accepts adult patients with a body mass index (BMI) of 40 or higher, or a BMI of 35-40 with an obesity-related co-morbidity such as sleep apnea, hypertension or diabetes.

Obesity is a recognized disease that is caused by multiple factors including genetics, hormones, and psychology. “Medically supervised weight loss programs typically result in three to four per cent of total long-term weight loss,” explains Dr. Schlachta. “Surgical intervention results in a sustained weight loss of 30 per cent and over a 70 per cent cure rate of obesity related co-morbidities. The greatest results are seen in the first year, usually with patients experiencing 20 to 30 pound loss in the first month.”

Lori always struggled with her weight, but it was her health issues that pushed her towards a surgical option. She had high blood pressure, sleep apnea, poor blood sugar, and high cholesterol. “I have a 10-year old daughter who needs a healthy mom and dad. She was my main motivator,” says Lori. “I couldn’t have lost weight and regained my health without surgery. In the past I’ve tried different programs, but I could never lose the weight – I needed a bigger tool.”

Before her surgery, Lori went to many appointments to see a nurse practitioner, dietician, social worker, and surgeon, have her blood taken and get a stomach ultrasound. “The program prepares you for the physical and emotional impacts of the surgery. We examined aspects outside of food such as how people will react to you following weight loss. At each appointment, I felt supported and like my care team had all the time in the world for me,” she says.

When she was prepared for surgery, LHSC surgeons Drs. Ahmad Elnahas and Schlachta performed a Roux-en-Y Gastric Bypass Surgery, a laparoscopic surgery that partitions the stomach by making a small pouch at the end of the esophagus and connecting it to the small intestine, thereby bypassing much of the small bowel. “The surgery reduces the size of the patient’s stomach, and therefore the amount of food and liquid that can be consumed and absorbed,” describes Dr. Schlachta. “While the surgery is technically reversible, for the majority of patients, the program is a lifetime commitment.”

Lori was home after just one night in hospital, and was given handouts specifying her dietary requirements starting with liquids and slowly moving towards solid foods during recovery. She has lost 70 pounds since her surgery five months ago and she no longer requires blood pressure pills.

“I feel better overall. Life is easier, work is easier, and keeping up with my daughter is easier,” she exclaims. “There are other ‘no scale victories as well’ such as noticing that I can easily sit in a chair with arms, and that my knees no longer feel sore. I’m planning on playing volleyball in the Fall.”

Lori now shops with friends who help make sure her clothes are not too baggy and she naturally chooses brighter coloured clothing. Her taste buds have also changed as she’s noticed she enjoys foods she previously didn’t such as beans and cauliflower.

In fiscal 2019, 145 patients received bariatric surgery in London. That volume has increased to 200 for fiscal 2020. “We’re proud to offer this full-service, highly effective program for London and area patients,” says Dr. Schlachta.