The first of a larger perioperative suite redesign

The first phase of a long-term plan to redesign perioperative suites at Victoria Hospital as well as PACU and day surgery is complete now that two new state-of-the-art operating rooms are operational.

“These OR’s have been under construction for eight months,” says Cheryl Churcher, director, perioperative care, LHSC. “Before becoming operational, staff have had the opportunity to become familiar with the new spaces.”

One of the operating rooms is a hybrid interventional vascular surgery suite and the other operating room is dedicated to thoracic surgery.  Surgeons, aneasthesiologists, nurses, and medical radiology technicians have all spent time training on the new technologies available in the rooms. New features include adjustable booms housing equipment, surgical gases and electrical improving flow and safety for staff and patients. The new operating rooms are also bigger, brighter and feature easier to clean floors.

High-definition monitors and a new integrated video system in both operating suites opens up future educational opportunities for staff and physicians. These new features will be of particular benefit for the thoracic surgeons who are leaders of advanced minimally invasive thoracoscopic chest surgery.

“The hybrid interventional vascular surgery operating suite features a state-of-the-art imaging system that provides high quality images of the vascular system needed for minimally invasive endovascular surgery, but it can also be positioned away from the operating table by the surgical team should open vascular surgery be needed,”  Dr. Guy DeRose, senior medical director of surgery, LHSC.  “This system is one of only five in Canada and has the most up-to-date angiography hardware and software available.”

The second phase of the plan to redesign perioperative suites at Victoria Hospital as well as PACU and Day Surgery will begin this summer. “During the upcoming summer months renovations will begin on five additional operating rooms,” adds Churcher.  “The next five operating rooms will take approximately 18 months to complete construction.” At the end of the second phase, there will be 18 fully functioning operating rooms at Victoria Hospital, seven of which will be brand new and state-of-the-art. 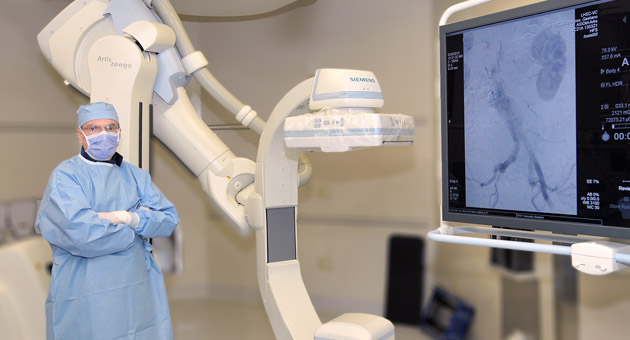