Low-grade gliomas, tumours that start in the brain, affect 10-15 per cent of the entire population of brain cancer patients.  Some low grade gliomas have high-risk features, which can behave aggressively and pose the threat of becoming malignant. They have only a 50% three year survival rate with surgery and/or radiation alone. Research shows that combining radiation and Temozolomide, a chemotherapy drug used to treat other types of brain tumours, can prolong survival for these high-risk patients.

In a recent study, Dr. Fisher and her team administered Temozolomide to 136 patients with low grade gliomas during radiation treatment, and then one week per month for the next year. Following a period of observation, the results were compared to an existing database of patients treated only with radiation. The preliminary results show the combined treatment increased the three year survival rates by approximately 35 per cent, greatly increasing the potential for higher, longer quality of life.

“My hope is that the treatment will prolong survival rates, and that some of these patients can live several years longer with a higher quality of life,” says Dr. Fisher, also an Associate Professor at Western University and a Radiation Oncologist at London Health Sciences Centre.

"London and our entire region is extremely fortunate to be home to many great physicians and researchers," says Neil Johnson, Regional Vice President of Cancer Services at London Health Sciences Centre and Cancer Care Ontario. "Physicians on our team, like Dr. Fisher, see the needs of our patients each and every day. By using their skills and resources to conduct research, they can better treat patients in our region and across our country."

The results of this international study were recently reported at the American Society of Clinical Oncology meeting. Despite the positive outcomes, there is still a great deal to be learned about the exact mechanism Temozolomide activates when combined with radiation. Dr. Fisher and her colleagues, including London Health Sciences Centre’s Dr. David MacDonald, a collaborator on this study, will continue to explore this interaction. 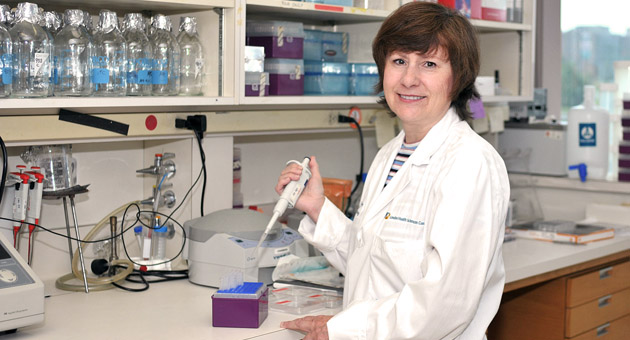