In late 2017, Hurricane Maria hit Puerto Rico (PR), leaving devastation and destruction in its wake. Recently LHSC Porter Jeff Davis had an opportunity to travel to the village of San Lorenzo in Mororvis, PR with Hope Agua Vita, a charity founded by Doug Tarry of St Thomas. The organization’s mission is to help rebuild the village which was hard hit by the storm, and the trip was an experience Davis says he will never forget.

Together with 21 other Hope Agua Vita volunteers, Davis participated in the rebuilding of one family home from the foundation up, along with two full wood-frame roof systems for other families over the course of six days. “It was heartbreaking to see this beautiful village, surrounded by lush landscape, just destroyed,” says Davis.  “The team worked incredibly hard in the short time we were there to help three families reclaim what they had lost, but we knew that around us there were hundreds more who still needed help.”

As the only humanitarian organization in the village, it took a while for the residents to develop a rapport with the volunteers however, before long, the locals embraced their Canadian helpers, coming out to assist in the work being done and thanking the team for their efforts.

“I was humbled to meet families who were so grateful that we would come all the way from Canada to help them,” says Davis. “Despite all they had been through, they were warm and friendly and wanted to help us and each other.”

To assist the community further, Davis was tasked with filming the work being done for a series of educational videos demonstrating proper building techniques for the villagers to use as they continue their re-building efforts.

On the subject of helping, Davis acknowledges that there were many people who made this mission possible, including the “Porters for Smiles” who approached him with the idea of holding a bake sale to support his fundraising efforts – a bake sale that raised over $900 in just three hours.

“It was so cool to see everyone get behind me and Hope Agua Vita. I was reminded how thoughtful the LHSC Portering team really is,” said Davis. “Those who came out to support the bake sale, and who bought tickets for the Westjet “Gift of Flight” we were raffling [won by an LHSC staff member] helped purchase the much needed materials and supplies that made it possible for us to do these re-builds.”

Despite sweltering conditions and less than optimal access to supplies – the nearest hardware store was a three hour round-trip – the team accomplished what they set out to do, and are already planning for their next mission in November.

Says Davis, “It was a tough trip, and we left with bruises and scars, but it was worth every bump. Sometimes you have to do something that’s bigger than yourself.” 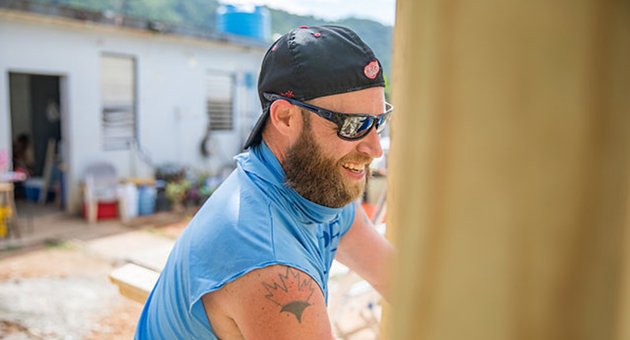