Dr. Richard Inculet is one of several individuals recognized by The Joint Medical Advisory Committee at LHSC for his outstanding contributions. 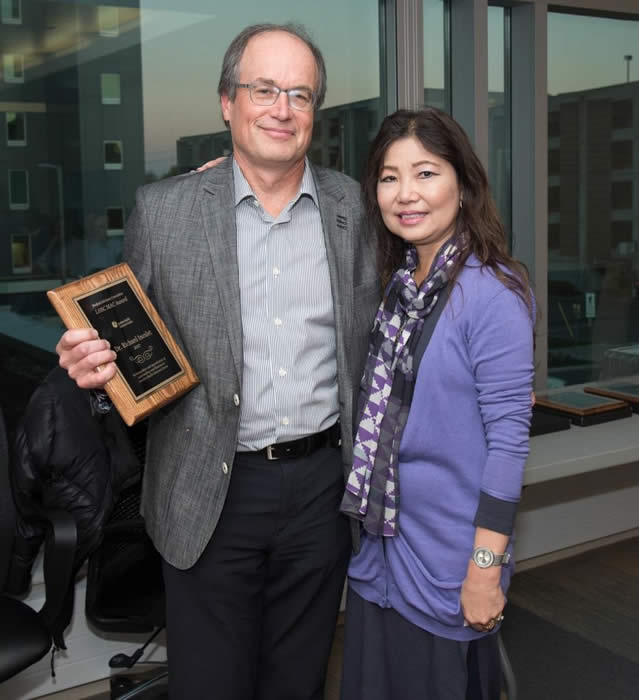 The Joint Medical Advisory Committee (MAC) recognizes the 2017 MAC Award winners for their commitment to the vision and mission of LHSC and St. Joseph’s, their leadership, integrity and motivation each provide to their peers.

Dr. Richard Inculet is the recipient of the 2017 LHSC MAC Award, for demonstrating qualities of leadership and provided outstanding contributions to the success of initiatives aligning with the strategic directions of LHSC.

Dr. Inculet is an exceptional and well-respected leader at the local, provincial, and national level. He served as the Chair/Chief, Division of Thoracic Surgery, Department of Surgery, since its inception in 1995 until 2017 and as the subspecialty Program Director from 1998 to 2008. Dr. Inculet crafted the vision for the Division at LHSC; recruited all of the members; and worked to establish its reputation for excellence in Thoracic Surgery.

Dr. Inculet also served as Head of the Division of Surgical Oncology, Department of Oncology, from 1992 to 2004. He led the Canadian Association of Thoracic Surgeons as President from 2012-2014 and he contributed as a member of the Royal College Thoracic Surgery Specialty Committee from 2009-2011. He continues to be involved on several Committees for Cancer Care Ontario, as well as many regional and local committees. At last count, he is presently serving on seven Hospital committees.

He has been the driving force behind telemedicine in our region and he has had an instrumental role in the development of his subspecialty as he and members of his team have been a part of many Canadian firsts in research and clinical care.

The entire Division of Thoracic Surgery would like to congratulate Dr. Inculet on his very significant contributions.