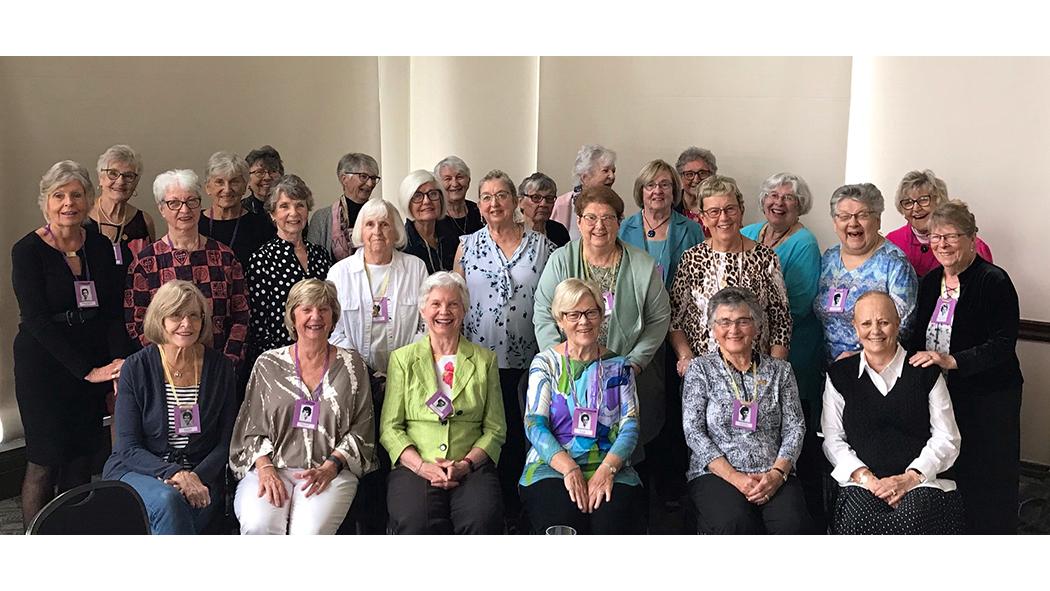 A member of the Victoria Hospital Class of 1962 glances up from looking at an old photo of a classmate, eyes brimming with nostalgia, looks around the table and wistfully states - It takes a minute to connect our faces now with the memory of how we were.

This nursing class, who became acquainted while in nursing residency at the old Victoria Hospital – which went on to become our former South Street site – has formed a unique, life-long camaraderie. What makes this particular class so tight-knit? There isn’t any specific reason one can point to and declare they’re closer because of x or y, but the efforts of Marilyn Fraser and Liz Wicklund, co-chairs of the class and who organize the regular reunions, certainly play a significant role.

The hard work it takes to coordinate and communicate with around 50 people who have varying communication preferences does not go unnoticed.

“Thank you for keeping us all together,” shared two classmates as they presented Marilyn with flowers.

Marilyn, after self-consciously accepting the flowers, graciously shared, “Everyone helps. What I do depends on the efforts of all of you too.”

This interaction, with what is said and what is understood, is an example as to why this class is so special. The mutual respect, admiration, and inclusive nature of the group is in and of itself admirable. This group, exuding all of these positive qualities, is able to participate in playful jokes that sometimes poke fun at one another, because the solid base of respect lies at the foundation.

After 60 years, these classmates, the ones that frequently participate in the reunion events, are like family. Speaking over one another, telling inside jokes and touching on memories with few words, leaving an outside listener wanting for more as the women laugh in response to details only they know, understanding and cherishing those moments in the silence of shared memory.

The breadth of experience of this class makes one reflect on how long and rich 60 years of life can be. Each of these women followed their own distinct paths whether they continued in nursing or pursued other interests. Among this group of storied women is a psychologist, a schoolteacher, a music teacher (who still teaches), an Order of Canada recipient and Honorary Colonel in the Reserves, and the first female Commanding Officer in the Navy Reserves (Marilyn Fraser). When getting the group to gather for a photo, Marilyn shouted at one point and turned to comment, “That’s my navy voice. I have to use it sometimes.” It’s effective.

The Class of ‘62’s reunions are three-day affairs – a meet-and-greet the first night, a luncheon and dinner on the second day, and a Fellowship service on the third morning. Husbands and partners are always invited and they are just as involved as the classmates. Even the husbands of classmates who have passed away still stay in contact with the group. In this way, and in others, they support one another. When partners pass on, or when grief visits in other profound ways, they reach out, donate money or an ear to listen during these difficult periods.

This year’s reunion was a little different. As the group has aged, there has been an increase in mobility difficulties and other health issues. The poster board of their remembered colleagues grows, and the pandemic kept them from meeting for two long years. They weren’t sure if this gathering would be their last, so they looked at the money raised through fees they have collected to fund their reunions, and saw there was some to spare. As a group, they decided they wanted to support an LHSC nurse’s continued education in the nursing field, and created a $500 bursary. The details of the award and the application process was organized by LHSC staff, and the award was presented at the luncheon.

The group was pleased to be able to support a current nurse with this gesture. As Ewelina Stoyanovich, the winner of the bursary, noted in her own story  she treasured the time she got to spend with the group, sharing nursing stories, exchanging understandings of how the profession used to be and what it’s like now – and how some things never change. The feeling was mutual for the class.

The VH Class of 1962 created a vibrantly welcome atmosphere. Each table was abuzz with conversation of reminiscences and new stories. Classmates talked about their travel after graduation – nursing in places as far reaching as New York City, California, Virginia Beach, Bermuda, and as close as Toronto – and as the hum of renewed connections continued, a classmate brought in Mrs. Chase.

Mrs. Chase is a mock-up of a medical training doll with the same name that’s right out of the past, and perhaps your nightmares. The actual medical training doll looked more like a real person, but the Mrs. Chase mock-up doll was created by classmate Dolly Boone (who also brings the doll to each reunion). About the size of a small, adult person, Mrs. Chase’s disproportionately large head lobs to the side as she is placed on a chair, her puffy arms resting in her lap, dressed in the nurse uniform the class remembers donning decades ago. Mrs. Chase’s face is made up with fake eyelashes and lipstick, and someone placed new socks on her worn feet. This medical training doll has experienced a lot – from practice baths to needle injections, this doll has retired alongside the classmates and rests at one of their homes between reunion appearances.

As everyone’s lunches are replaced with dessert, the luncheon activity is revealed by the two members who organized the game. Grabbing the microphone, Patricia talks about Jeopardy as the inspiration behind the trivia game they organized, and notes, "You have all heard my full name today – Patricia. I’ve been known as Patsy, Pat, Patty, and now Patricia. I have lived many lives."

Before the game begins, Gale takes the microphone and says, "I’m just Gale. Among other things."

As the trivia starts and numbered boxes with associated point amounts are chosen, the group squeezes squeaky dog toys as buzzers, playfully shouting above one another, answering questions about nursing, about their time in nursing residency, about the importance of mitered corners in making patients’ beds (this caused a stir of discussion and, it turns out, many still miter the corners of their own beds), as well as lifestyle questions of their time living together such as, “What were two staples found consistently in our kitchenette?” (The answer was peanut butter and Arrowroot cookies).

When the trivia game declared a winner (Table 1), small gifts were handed out. Before they were to move out of the lunch space to their next gathering spot to pour over old photo albums, play cards, drink a few glasses of wine before dinner, and overall enjoy one another’s company, the group was encouraged to burst into their class song (that they all remembered the lyrics to), jovially singing their anthem after Gale declared, "The Class of ’62. We were artistic. We were scientific. And we had a hell of a spirit."

Before getting up to leave, Marilyn took control of the microphone, and as co-chair of the class, and co-organizer of these meaningful, exceptional reunion events, she addressed the group with one important question: "Before we leave today, we need to decide the future. Is this it? Where do we go from here?"

Spoiler alert: They agreed to a 2024 reunion! The tradition will continue.