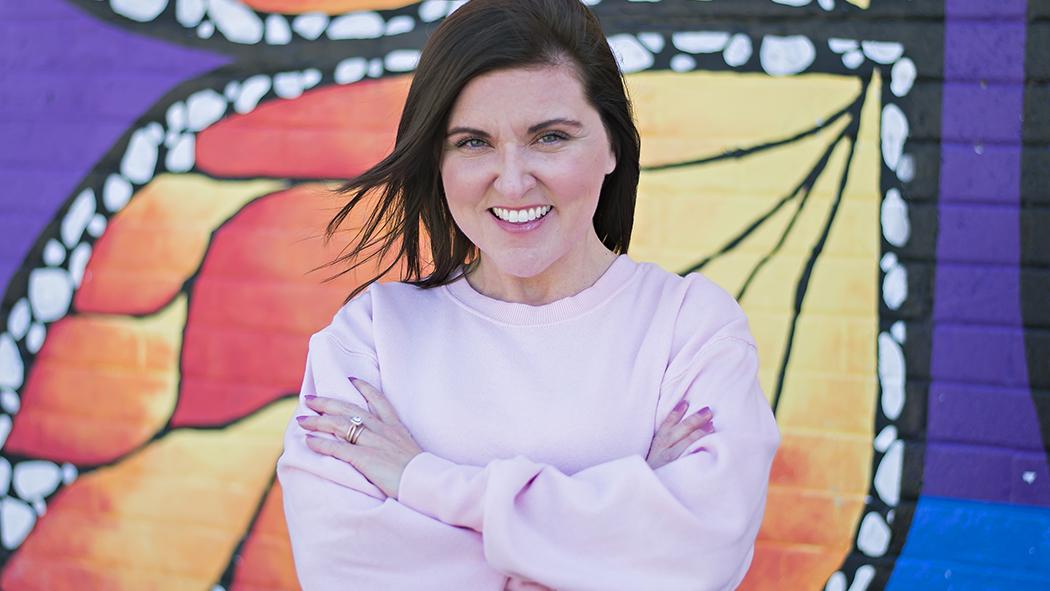 Melissa Snowden was diagnosed with Cystic Fibrosis (CF) at eight weeks old. When she was born she was small – weighing around five lbs. Melissa explains that she wasn’t well after she was born. She couldn’t breastfeed because she was so full of mucous, she wasn’t really growing, and was still struggling when she was sent home. Melissa was rushed to hospital as a baby when her right upper lobe collapsed, and when she was admitted, they performed the CF diagnostic tests. “This would have been such a trying time on my parents, as I was their first child,” Melissa says.

Right away Melissa started on inhalation treatments to help open her airways to get her breathing properly. Nowadays, there are various physiotherapies that can be provided to help alleviate symptoms, but back when Melissa was first diagnosed, her health care team used a technique where they tilted her bed so her head was down on an incline in order to try to drain out the mucous. “Doctors would also take their index and middle finger and tap on my chest on the front and back to help me cough and remove mucous too,” Melissa explained. “It has now evolved, and so have other treatments, but the principles remain the same – cough and remove the mucous.”

Melissa has changed clinics a few times since her diagnosis that includes CF clinics in Toronto, Kitchener, and Calgary. After living in Calgary for a number of years, Melissa decided to move back to Ontario. She felt she received such excellent care in Calgary that she asked her doctor at that clinic what CF clinic they respected in Ontario that they would recommend. The doctor noted London Health Sciences Centre, and as a result, she has been a patient at the LHSC CF clinic for the past 11 years.

“It's been great. It’s a really wonderful clinic – it’s highly organized, the nurse coordinator, Tracy, is phenomenal I absolutely admire her. She has all of us CF patients who she needs to keep track of treatments, and navigates everyone’s unique situations really well,” Melissa says. “The doctors and support staff are also amazing. When I first came, I was home for five days and discovered I was pregnant. I had the honour of being under care at LHSC with the CF team, the obstetrics team, and, since with CF as you age the pancreas doesn’t always work well so we’re prone to becoming diabetic, I was also seen by the endocrinologist team. Through all of it, my experience as a patient at LHSC has been really great.”

Since CF is a progressive, deteriorating disease, each time a person with CF gets sick, scar tissue builds in the lungs and they may not recover to the same level of wellness as before. “Over the past two and a half years, my CF had started to decide what I can and cannot do, it was a real struggle between mind over matter, and my mind said I could do one thing and my body said another,” Melissa explains. “I would get sick, then get better but not for very long. I was trying to do so much – be the attentive mother and wife while working full-time – all of that slowly exhausted me and I wasn’t able to get back up to where I felt before because I had been sick too often to pull it back together. I’m a huge mind over matter person, I always believe that if my mind believes I’m well, then I’m well. But I was trying to believe I was well while feeling so unwell and it because so hard to picture myself running, breathing, and exercising when I wasn’t able to do those things.”

Melissa continues, “The disconnect for me was tough. I used to be able to get back. My body shifted and adjusted after having a baby and after an accumulation of many other factors, I couldn’t get better. The little things like doing laundry and making beds was exhausting. I was trying to stay up all day and that was exhausting – I had to have naps. When I slept, sometimes my lungs would fill with mucous and even sleeping was tough.”

Melissa wasn’t sick enough to be put on the transplant list, but was not well enough to be living to her full potential. Her oxygen lower than it should be, her heart was working overtime, and she was congested, tired and struggling. “You’re either really, really sick and transplant bound, or you’re in the limbo stage, and almost too-healthy for some treatment with your numbers in a pretty acceptable place, but doesn’t reflect how you really feel. Trikafta had been approved at this point, and Tracy said where my health was at, I was one of the people at the top of the list in the clinic eligible to start the medication.”

Melissa started taking Trikafta in November 2021 and describes her experience as amazing. “It’s been life-changing, life-giving, and it’s been a total gift. It’s really propelled my health in a totally different direction. In truth, I’ve always lived a life as a healthy person, and I think that’s really served me, and I had in my head that I’m a healthy person, that there’s nothing I can’t do because of my disease, there’s nothing that can get in my way of my living. Trikafta brought me back to that alignment of mind and body. I don’t have to worry about this disease anymore because it’s managed. In terms of other medication or treatments, Trikafta was the treatment to get me to the place I am now. Trikafta really allows me to live again, and feel like a normal person.”

Trikafta is a daily medication that she takes twice a day, 12 hours apart and she, and other CF patients on Trikafta, will continue to take it daily until an even better treatment is discovered or a cure is found.

Melissa feels renewed. She says she can laugh, sing, and exercise without coughing or if there is a cough, it’s minor. She says, “My sense of smell has come back and now it’s like a super power sense of smell, and I’ve been able to grow personally and professionally too. I haven’t been working for three years, and in the last month or so, I’ve been developing a holistic health and wellness coaching business because I finally have energy to work on it and talk to people.” As Melissa looks into the future she comments, “In my youth I was in the choir at Church and school and I did theatre in high school, now I have a singing lesson once a week. I’m going to get back into singing, dancing, and theatre when the pandemic wanes – they’re activities I miss and love.”

Melissa says, “My son is in grade five now and more independent so I’m able to focus on my health a bit more which is another blessing. But the contrast between how exhausted I was before taking Trikafta versus how I feel now has been a significant gift.”