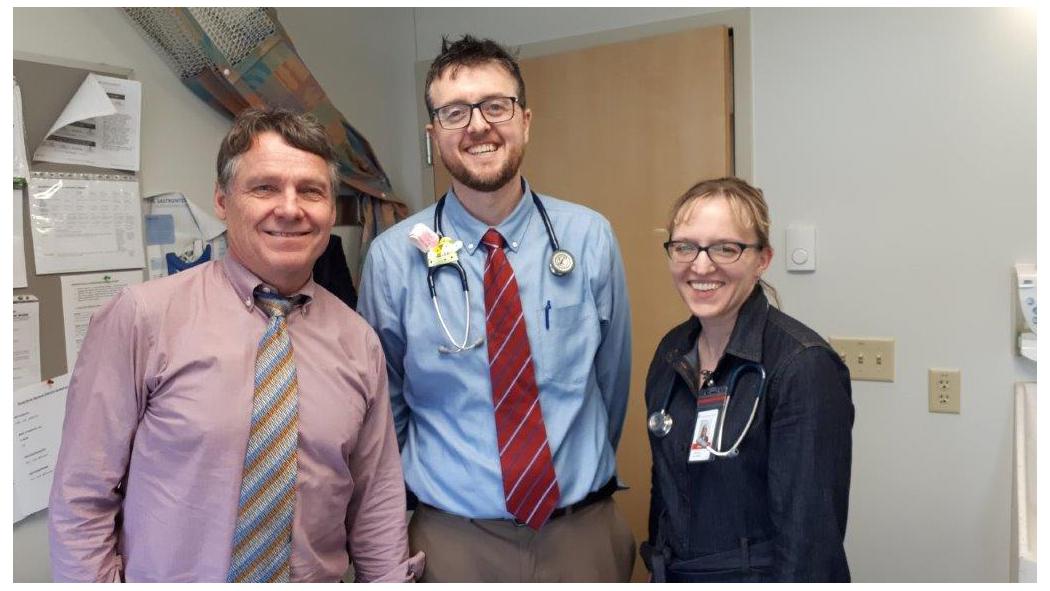 From left to right: Dr. James Lewis, Dr. Michael Nicholson, Dr. Heather Racz. Please note this photo was taken prior to the pandemic.

Cystic Fibrosis (CF) is an inherited disorder caused by a mutation in the gene that produces the cystic fibrosis transmembrane conductance regulator (CFTR) protein. CF primarily causes damage to the lungs, but it can also negatively impact the digestive system and other organs. To diagnose the disorder, CF is identified at birth or shortly thereafter using a blood test and examining family history. It is a disorder that patients manage for their lifetime, but a new medication – Trikafta – is offering new hope for CF patients at Victoria Hospital’s (VH) Cystic Fibrosis Clinic.

In the middle of 2020, Trikafta became available to select CF patients at LHSC through compassionate supply as the drug was not yet approved by Health Canada. “Within three months of gaining access to the medication, we started two of our patients on it,” Tracy Gooyers, Nurse Case Manager, Adult Cystic Fibrosis Program at VH, explains. “And in the entire compassionate supply program we had 14 patients, out of the CF programs’ total of 130 patients. The drug costs were covered and Trikafta was given to the sickest patients in our program. Then Health Canada approved the drug for use in June 2021. Thankfully the Ontario Government provided funding through ODB in September 2021.”

In Canada, as of 2020, there were 4,332 people with cystic fibrosis. Over the last twenty years, the median age of survival for those living with CF increased from 35.5 years, to 55.4 years in 2020. Dr. Lewis comments, “Even before the introduction of Trikafta, Canada had one of the highest median survival rates because of our excellent medical care. That is to say, CF treatments are still onerous on the patients. But when they start taking this medication, they feel confident because the positive impact is felt so quickly, and it brings hope that CF patients may be able to live an average life span.”

Trikafta is a medication currently available to those with a specific genetic profile and over the age of 12. That genetic profile is shared by about 80 per cent of the CF patient population. “Right now, it’s assumed patients will need it for life since it corrects protein production but doesn’t correct the gene – it isn’t gene therapy. For patients eligible to take Trikafta, we want it started before complications from CF arise,” explains Dr. Lewis.

Recurrent infections in the lungs is what causes damage in CF patients, reducing lung function, causing a greater need for hospital visits and stays, and further medical intervention along with a decrease in quality of life. With the introduction of Trikafta, these patients’ conditions are generally less severe. “We haven’t had a lung transplant referral in a year,” says Gooyers. “We have patients who may have needed it, but because of the effectiveness of Trikafta, they have been taken out of that discussion, at least so far.”

While lung transplants are helpful for those with advanced lung disease, transplant is not just a matter of replacing lungs - the patient experiences a major surgery that requires monitoring and taking various, toxic drugs so the organs aren’t rejected and so they don’t develop complications like an infection or rejection. It is a life-saving procedure but comes with great risk and a substitution of other problems. For patients who have received a transplant, they say they’ve never been able to breathe so well before. “But with Trikafta, we’ve been hearing similar comments from patients. That they’re able to breathe well, that they’ve never felt so good, and this drug is providing that life-changing experience without major surgery and the possible complications that come with it. It’s a very emotional experience to see these patients’ positive transformation with such a simple and effective intervention,” says Gooyers.

This drug is a great example of the progress towards personalized medicine, where health care providers look at the genetics of a patient or patient group and target a drug or therapy to correct the issue. However, right now, about 10% of patients are not eligible to take this medication because of their genetics.

Dr. Lewis, Director, is a respirologist and has been practicing for 30 years. He began his Director role in the CF clinic in 2011. There are two other physicians in the Adult CF Program – Dr. Heather Racz who started in 2010 and Dr. Michael Nicholson who started in 2020.

The CF clinic assesses CF patients every three months to monitor their condition and sees patients stretching from Windsor across south western Ontario and has a satellite clinic in Sault Ste. Marie. Most of the patients are transitioned at 18 years of age from paediatric programs including the one here at Children’s Hospital but there are some patients diagnosed as adults.

One of the patients’ point-of-contact at the clinic is Tracy Gooyers, RN. Whenever they have a question or concern about their condition, they call or email Tracy. This helps the patient when they’re experiencing medical problems to possibly avoid having to go to hospital and emergency. As the clinic’s only full-time member, Gooyers coordinates and connects with patients, and supports patients in the execution of their care plan. On the team there is also a social worker Stefan Branov, dietitian Robin Harper, and physiotherapist Faizan Ahmed. Everyone has a unique and important role in the clinic’s operations such as creating a care plan, and emotionally supporting patients.

Gooyers and Dr. Lewis both agree that seeing CF patients come through the clinic and witness them stick to their care plans but still see their lung function decrease or their overall health become negatively impacted due to their condition is a uniquely emotional experience because of their closeness with these patients since they frequently monitor, check-in, and communicate with them. Dr. Lewis says, “When I first started out working with CF patients, I was not expecting the personal impact of the unique and challenging issues this patient population experiences, but it has been the most rewarding period of my career over the last 30 years. I’ve done admin in the dean’s office, research, I see patients with other diseases, and my experience with CF patients is unique in how these patients have positively impacted my life personally and professionally. The emotional connection we have with patients makes the impact of this drug even more profound.”

Gooyers comments, “I’ve seen a lot in this clinic over the past 15 years. But recently, those patients that have been taking Trikafta, I’ve seen them come into the clinic doing so much better than they were - going to university when they never thought that was possible, thinking about kids and having relationships - just having so much hope for the future after taking this drug. We’ve experienced the devastation of becoming emotionally attached to a patient over the years and seeing them die from complications because of CF or their transplant organs were rejected – that loss is profound – we know them and their families. This new drug changes the trajectory for so many of our patients and it brings a new hope.”

This new treatment method changes the conversation when new patients are diagnosed with CF and provides hope to the patients and families for those eligible to take the medication. “There’s a new feeling in the clinic,” explains Gooyers.

The effectiveness of this treatment not only provides hope for the patients taking the medication, but it provides hope for the future as more research and development continues for drugs like these for CF patients with other genetic profiles. Gooyers says, “Gene therapies like Trikafta for CF are a big topic at conferences. There is plenty of research going into these possible therapies and hopefully even more patients will benefit in the near future. The possibility of these drugs is exciting.”
Please stay tuned for the next CF story that will share the LHSC paediatric clinic perspective on CF in children as a part of this story series in recognition of Cystic Fibrosis Month.