In 2008, 21,000 Canadians will die from the effects of air pollution. While most of these deaths will be due to chronic exposure over a number of years, 2,682 will be the result of acute short term exposure. The total number of acute premature deaths is expected to increase from 2,682 in 2008 to 4,913 deaths in 2031, and is rising faster than the overall growth of the population during that same time period. The accumulated number of premature deaths will be close to 90,000.

Carbon dioxide - is a gas composed of one carbon molecule and two oxygen molecules. It is produced from the combustion of coal or hydrocarbons and by the breathing of humans and other animals. Carbon dioxide exists naturally at low concentrations in the atmosphere and acts as a greenhouse gas helping to insulate our Earth and make it habitable. When we burn fossil fuels, we are taking naturally stored carbon dioxide from the Earth and releasing it into the atmosphere. This additional carbon dioxide is contributing to global warming.

Volatile organic compounds (VOC's) - are a large family of carbon-containing compounds, which are emitted or evaporate into the atmosphere where they participate in photochemical reactions. Some VOC's are toxic and/or carcinogenic. Most VOC's, to varying degrees, contribute to the formation of ground level ozone. The VOC's that may cause stratospheric ozone depletion are mostly a chlorine-containing group of compounds known as Chloroflourocarbons or CFC's. They gradually release chlorine and other halogens into the stratosphere. These compounds are particularly effective at destroying the ozone even when present in small quantities.

Nitrogen oxides (NOx) – is a generic term for a group of highly reactive compounds containing nitrogen and oxygen. Nitrogen oxides contribute to global warming, acid rain, the formation of ground level ozone, and directly affect our breathing. One common pollutant from this group is NO2, which can be seen as a reddish-brown haze over many urban areas.

Sulfur oxides (SOx) – Long-term exposure to high levels of SO2 gas and particles cause respiratory illness and aggravate existing heart disease. SO2 reacts with other chemicals to form sulfate particles that gather in our lungs. Sulfur oxides also contribute to acid rain and plant and water damage.

Hydrocarbons – are compounds that are made up of hydrogen and carbon and result from incomplete fuel combustion and fuel evaporation. They are a precursor to ground level ozone, a major component of smog. 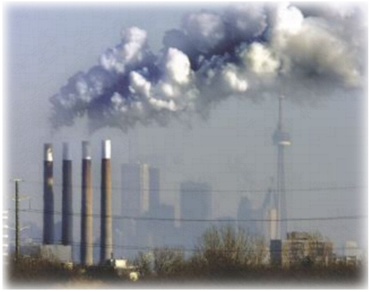