Supply side management relates to the process of procuring, generating, and distributing energy in the most efficient manner possible. This includes the creation of appropriate energy procurement contracts with suppliers and distributers, implementing gas and electricity purchasing strategies, and making operational improvements at LHSC's Power Plant.

LHSC’s utility cost has been trending downward since 2012, as a direct result of adapting our procurement strategies to the changing markets for both natural gas and electricity. These measures have saved the hospital hundreds of thousands of dollars (on an annual utility budget of approximately $15 million). 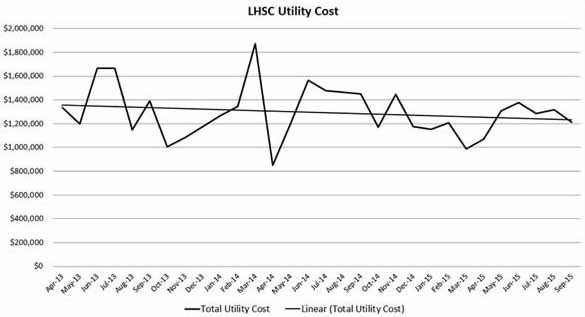 LHSC purchases over twenty five million cubic meters of natural gas each year, enough to heat about 10,000 Canadian homes, at a cost of approximately $5 million per year. Natural gas is used primarily at the Victoria Hospital Power Plant to produce both steam and electricity, through a process known as co-generation.

Prior to 2012, LHSC used what was called a termed ladder approach to purchasing natural gas. This was a hedging (buying bulk in advance) strategy that required a gas purchase every three to four months whereby a portion of the gas was bought for the subsequent three gas terms. We can see this hedging pattern in the graph below, marked by the green lines. Buying gas this way allowed us to better manage short term spikes in price fluctuations. However, a premium is paid for reaching out and locking in. We can see the gap between the gas purchase price (green) and the market (spot) price (blue) as a result of buying gas well in advance of the actual consumption date. 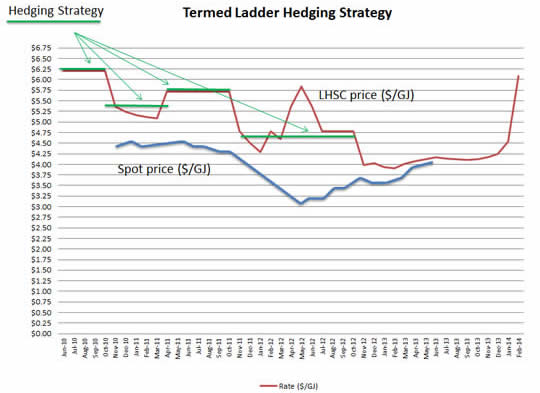 Since 2012, LHSC has been purchasing gas using a “Risk Sensor” approach, using assessments of gas market price projections to determine how much gas to hedge, rather than purchasing set volumes on a fixed schedule (the termed ladder approach above). A target price is set at the beginning of each fiscal year and the risk sensor reports determine if that target can be reached with 90% confidence each week, in which case no hedge is made and LHSC will buy gas immediately. If the report suggests that LHSC cannot make its target without a hedge, then the minimum hedge required to maintain the target at 90% confidence is made. Essentially, this is a way of managing risk and still taking advantage of cheaper market price gas vs. hedged price gas. The result is that LHSC now buys gas for less in the long run and remains fairly confident when creating gas budgets.

LHSC uses approximately 75 million kWh of electricity each year, enough to power 8,000 average size homes in London, at an annual cost of approximately $8 million. LHSC buys electricity from London Hydro, generates electricity at the Victoria Hospital Power Plant, and sells electricity to Parkwood Institute and back to the municipal grid.

The power plant can generate all of Victoria Hospital’s required electricity in the winter months and about half that in the summer months. In the winter, Victoria hospital can even generate more electricity than we require, allowing us to sell electricity back to London Hydro, ideally at a profit.

Victoria Hospital works to remain a Class A customer

Generation: The Victoria Hospital Power Plant normally generates 4,500-5,000 kW of electricity in the summer. Only the KB7 gas turbine and steam turbine run because there is not enough steam demand to run the KB5 gas turbine as well. The first step to increasing generation was to ensure that all absorption chillers were running during peak days to create as much steam demand as possible. The second step was to install a pressure controlled steam venting valve at the power plant. The KB5 turbine would then run during peak days and excess steam would be vented into the atmosphere so that more electricity could be generated.

Building Shutdowns – The second part of the plan was to shut down as much of the major electricity consuming equipment as possible during the projected peak days, targeting electric chillers, pumps, and air handling units. Areas at Victoria Hospital that were unoccupied or non-patient care between 4 pm – 8 pm were identified and their cooling equipment was added to a shutdown list. A control screen was created on the building automation system and a shutdown procedure was developed and trialed prior to the peak days.

Choosing between gas and electricity

Now that Victoria Hospital has become a Class A customer and has been able to create and implement a plan to remain a Class A customer, we must become proficient in operating as a Class A customer as described above. A good portion of this work will be facilitated through an Energy Management Utility software system called e.RIS from Eramosa. This system will bring in live, five-minute pricing from the IESO and also calculate the cost to generate electricity at current gas purchase prices. Victoria hospital can then decide whether it will purchase or generate electricity and the building will adjust according. The ultimate goal will be to have this process automated so that the equipment is responding to the market prices, maximizing the amount of time that we are capturing the best price from either fuel source.