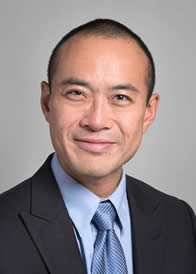 Dr. Kevin Fung is a Professor and the Chair, City-wide Chief of the Department since July 2017. His surgical focus is in Laryngology, Head and Neck Surgery and Reconstructive Microvascular Surgery. He is cross-appointed to the Department of Oncology and the Don Wright Faculty of Music. Associate Scientist at the Lawson Health Research Institute; and Director of the Spasmodic Dysphonia Clinic and Vocal Health Clinic at Victoria Hospital. He has been a member of the Faculty of Graduate, Health & Rehabilitation Sciences since 2006, where he has supervised 14 MSc and two PhD candidates.

He received his undergraduate degree in Physics and Medical Biophysics from Western in 1994 and his medical degree from Queen’s University in 1997. He completed his residency in Otolaryngology at Schulich Medicine in 2002. He then received fellowship training in Head and Neck Surgery and Microvascular Reconstructive Surgery at the University of Michigan. While at Michigan, he pursued additional training in Laryngology and research on gene therapy for management of peripheral nerve injury. He obtained his Master’s certificate in Physician Leadership Development at the York University Schulich School of Business. He acquired additional leadership and management training at the Ivey School of Business in 2006, as well as the Harvard School of Public Health in 2013.

Dr. Fung co-performed the first transoral robotic surgery (TORS) in Canada in 2010. His clinical interests include transoral laser microsurgery, TORS, head and neck oncology, microvascular reconstructive surgery, outcomes research and medical education. His clinical expertise in oncology and laryngology has earned him invited visiting professorships at many institutes, including: the Henry Ford Hospital, Detroit, Michigan; the Apollo Cancer Hospital Institute, Chennai, India; McMaster University; the University of Toronto; and the University of Ottawa.

Dr. Fung was named Honorary Class President of the Medicine Class of 2015. In addition to his roles at Schulich Medicine, he is actively involved in significant leadership roles regionally, nationally and internationally. Regionally, he is Co-Chair of the Interprofessional Education Working Group for the Southwestern Ontario Academic Health Science Network. Nationally, he is the Chair of the Undergraduate Medical Education Committee for the Canadian Society of Otolaryngology – Head and Neck Surgery, as well as a member of the Examination Board of the Royal College of Physicians and Surgeons of Canada. Internationally, he is a Fellow of the Triological Society; the American College of Surgeons; and the American Academy of Otolaryngology – Head and Neck Surgery, where he is a member of various committees dealing with medical education. He has 115 peer-reviewed publications and three book chapters.