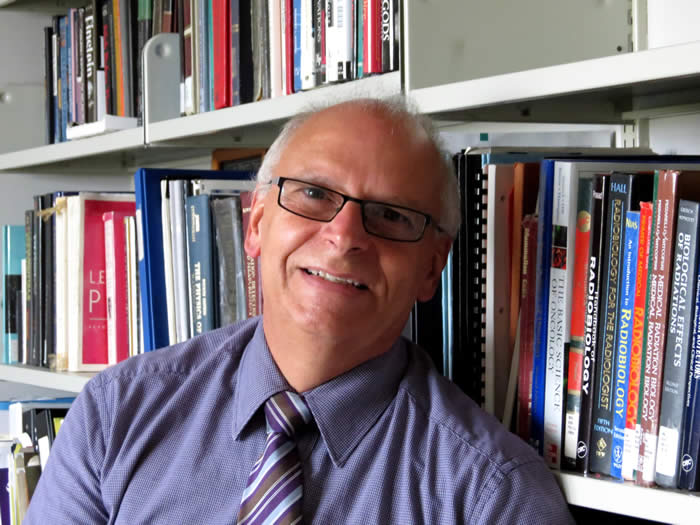 Dr. Battista has been Director, Physics Research at the London Regional Cancer Program since 1988 - just after it opened its doors to the public.

Dr. Battista completed his Ph.D. degree at the University of Toronto in 1977 under the supervision of Dr. Michael Bronskill. The thesis project dealt with “Compton tomography”, enabling slice-by-slice 3D imaging of the human body (similar to CT scans). As a post-doctoral resident in medical physics he then gained clinical physics experience at the Princess Margaret Hospital, under the guidance of Dr. “Jack” Cunningham – a pioneer in computerized dose computations.  Jerry moved to the Cross Cancer Institute and University of Alberta in 1979. With graduate students, his team pioneered the introduction of a new breed of ‘convolution/superposition’ algorithms for three-dimensional (3D) dose computations used today for radiation treatment planning of cancer patients.

Current research interests include 3D dose measurements in gels using optical CT scans, and algorithms for adaptive dose re-optimization for CT-guided radiotherapy. He has published over 120 peer-reviewed articles and has co-authored major research grants, including one from the Ontario government (ORF) to support the “Ontario Consortium for Adaptive Interventions in Radiation Oncology” (OCAIRO), in collaboration with his previous graduate students and with industry.

Jerry is an award-winning teacher at Western and he is known for his clear presentations. His enthusiastic style and vivid analogies brings physics concepts to a wide range of audiences with diverse backgrounds, including clinicians, students, and the general public. He has received a Schulich School of Medicine Award (2013) and Western’s Pleva Award (2014) for excellence in teaching. He was nominated to the “Top 100” lecturers in Ontario Universities and was nominated for a national 3M Teaching Fellowship at Western (2012, 2014). Dr. Battista has served as external Ph.D. examiner at other Universities - from Quebec City to Stockholm. He has mentored many graduate students, some who now lead the field of modern radiotherapy. They collectively have received over 20 awards from Canadian, and international organizations, for excellence in publications or presentations. Recently, he has turned his attention to developing small-scale medical imaging systems (e.g. CT) dedicated to teaching via interactive demonstrations and laboratory exercises.

Jerry is a Fellow of the Canadian College of Physicists in Medicine (FCCPM), Canadian Organization of Medical Physics (FCOMP) and American Association of Physicists in Medicine (FAAPM). Since 1988, Dr. Battista has been driving Physics Research at the London Regional Cancer Program, in London, Ontario, Canada. He is Professor of Medical Biophysics at Western, with cross-appointments to the Departments of Oncology, Physics, Diagnostic Imaging and Nuclear Medicine, and the Biomedical Engineering Program. He became Head of the Division of Radiation Oncology at Western in 1994, and Chair of the Medical Biophysics Department in 2004. He has served as an external grant reviewer to national granting agencies such as the National Cancer Institute of Canada, Canadian Health Research Institutes, National Science and Engineering Research Council, and National Institutes of Health in the US. He serves as advisor to the Ontario Ministry of Health and Cancer Care Ontario, as provincial coordinator for postgraduate residency training programs and undergraduate studentships in clinical physics. He advises the provincial government on radiation emergency procedures, including participation in an educational 2-day course for “first responders”.

In his spare time, Jerry enjoys playing guitar of all styles and is a member of the London Jazz Orchestra, a community group of 17 musicians dedicated to “big band” music. The group has been acclaimed as “London’s Best Jazz Band” for several years running.