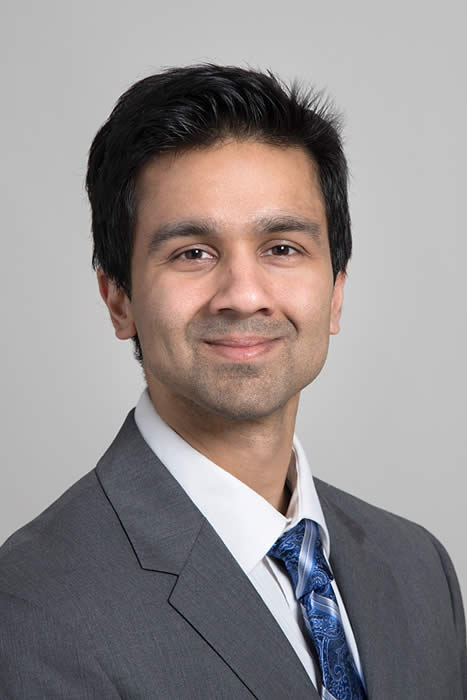 Dr. Vikram Velker is a Radiation Oncologist at the London Regional Cancer Program and Assistant Professor in the Department of Oncology, Schulich School of Medicine and Dentistry, Western University.  His clinical sites of interest are gynecological and hematological malignancies, with specialization in gynecologic and genitourinary interstitial brachytherapy.

Dr. Velker was born and raised in Windsor, Ontario.  He completed undergraduate studies with a BSc at the University of Windsor, and then completed medical school at Western University in London, Ontario.   He subsequently completed a 5 year residency in Radiation Oncology at the London Regional Cancer Program, followed by a fellowship in image guided gynecologic and genitourinary brachytherapy under the supervision of Dr. David D’Souza.  He is a fellow of the Royal College of Physicians and Surgeons and a member of the Canadian Association of Radiation Oncology.

He has received numerous accolades during his medical training, including awards for compassionate care.   He was a recipient of the 2011 Canadian Radiation Oncology Foundation Sanofi-Aventis Research Innovation Award.  His current research interests are in the treatment of gynecologic tumours.  He is a co-author of the textbook Radiation Oncology Primer and Review: Essential Concepts and Protocols published in 2013.  Dr. Velker has served on the Board of Directors for the Canadian Association of Radiation Oncology from 2013-2015.

In his spare time, Dr. Velker enjoys spending time outdoors with his wife and their twin children.  He is a third degree blackbelt and former karate instructor, and hopes to find his way back to the martial arts in the near future.