Any patient who has undergone major surgery, sustained a significant trauma or suffered a serious infection will have a widespread inflammatory response. Visibly, inflammation causes fluid to collect throughout the body tissues, making the patient look swollen. It also makes the blood vessels get wider (dilate), leading to a reduction in the blood pressure. This may need to be treated with large amounts of intravenous fluids. Systemic inflammation will also increase the metabolic rate, causing the heart rate and breathing to increase. Inflammation can cause a mild fever and rise in the white blood cell count.

Inflammation also activates the clotting system. The medical term for clotting is coagulation. When a patient has systemic inflammation, they are at increased risk for the development of blood clots. If the cause of the inflammation is not relieved, clotting can become a serious problems. Clotting can occur in the tiny capillaries or in larger veins and arteries.  Clotting can cause damage to a variety of organs or send blood clots to the lung (called a pulmonary embolism).

When clotting factors get used up because of persistent and severe clotting, the patient may begin to bleed. Bleeding that develops due to the depletion of clotting factors is a life-threatening complication called Disseminated Intravascular Coagulation (or DIC).

Laboratory tests can be done to evaluate the coagulation system. The most common tests are called the INR (International Normalized Ratio) and the aPTT (Activated Partial Prothrombin Time). These tests measure the time in seconds that it takes the blood to clot. If it takes longer for blood to clot than normal, the INR and/or aPTT become higher (prolonged). This indicates an increased risk for bleeding. If the INR and aPTT is increased because the patient has used up too many clotting factors, we can replace the clotting factors by giving a transfusion of Plasma. On rare occasions, we may give a concentrated preparation of a specific clotting factor.

We often give low dose anticoagulants by subcutaneous injection (under the skin) to thin the blood and reduce the chances of developing blood clots. We call this DVT (Deep Vein Thrombosis) or Veno-Thrombotic Embolic (VTE) prevention. 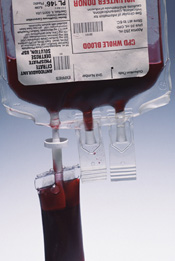 Blood transfusions may be required if bleeding develops.