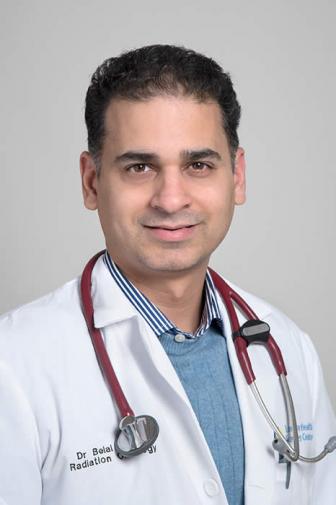 Dr. Belal Ahmad is an Associate Professor of Radiation Oncology at Western University.  He graduated with a Bachelors in Human Biology with high distinction from the University of Toronto, prior to enrolling at Queen’s University Medical School, where he graduated with his MD in 2002.  He pursued his residency in Radiation Oncology at McMaster University, graduating in 2007, and did a one year fellowship at Western University studying Image Guided Radiotherapy, finishing in 2008.  He joined the London Regional Cancer Program as a full time staff physician in July 2008.

His clinical and research interests center on genitourinary malignancies, gastrointestinal malignancies, skin cancer, and palliative radiotherapy.  Dr. Ahmad has a strong interest in education, and is currently the co-director of undergraduate oncology at the Schulich School of Medicine.  He is also a specialty examiner for the Royal College of Physicians and Surgeons of Canada, as well as an examiner for the Medical Council of Canada.

Dr. Ahmad was born and raised in the Toronto area.  Outside hobbies include traveling the world with his wife, playing soccer, and an interest in obscure trivia.