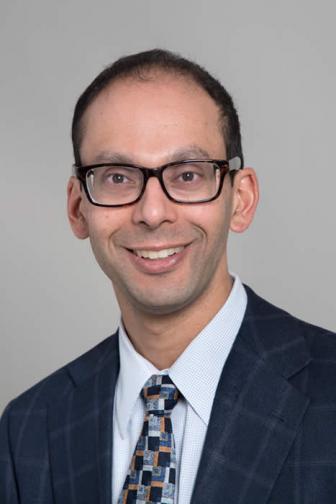 David Paul D’Souza, MD, FRCPC, is an Associate Professor and Radiation Oncologist at Western University, Schulich School of Medicine and Victoria Hospital/London Health Sciences Centre. After receiving his Doctor of Medicine from the University of Toronto, he completed his residency at McMaster University, Hamilton. He attained Board certification in Radiation Oncology from the American Board of Radiology and is a Fellow of the Royal College of Physicians and Surgeons of Canada. David completed a Fellowship in Brachytherapy from Memorial Sloan-Kettering Cancer Center, New York.

With this acquired skill, he introduced 3D Image Guided Brachytherapy for gynecologic cancers (the first in Ontario) using both intracavitary and interstitial techniques. David has introduced numerous innovations into the treatment of gynecologic cancers including use of IMRT, ultrasound guided brachytherapy and HDR interstitial brachytherapy including for women with locally recurrent disease requiring retreatment. As a result he receives referrals from across Ontario. He has co-authored a number of practice guidelines including The Role of IMRT in Gynecologic Cancers, Organizational Guideline for Gynecologic Oncology Services in Ontario, The Delivery of Brachytherapy for Cervical Cancer: Organizational and Technical Advice to Facilitate High-Quality Care in Ontario and SOGC-GOC-SCC Guidelines for the Management of Endometrial Cancer. He is co-Lead of the Cancer Care Ontario Gynecologic Radiation Oncology Community of Practice.

He has expertise in the treatment of prostate cancer including the use of high dose rate (HDR) and low dose rate (LDR) prostate brachytherapy. With his leadership, LHSC implemented intraoperative real-time dynamic planning with ultrasound for prostate brachytherapy and are currently investigating the use of 3D ultrasound. David has a number of areas of clinical research including accrual of patients to clinical trials and is the Principal Investigator for Western University with the National Cancer Institute (NCI) funded cooperative group, NRG Oncology.

Outside of medicine, David enjoys a number of passions including his family, traveling, playing the piano and organ and long distance running, having 4 Boston Marathons under his belt.